Skip to main content
We, the People of India Have One Mission – Save our Freedom, Democracy, Constitution!
CPIML 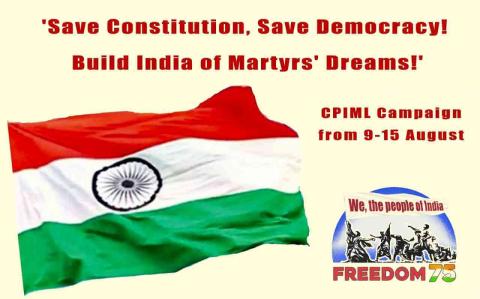 We, the People of India Have One Mission – Save our Freedom, Democracy, Constitution!

A week ahead of the 75th anniversary of Independence, India commemorates the 80th anniversary of the Quit India movement on 9 August, 2022. The Congress leadership had been arrested immediately after giving the Quit India call from the All India Congress Committee session in Mumbai, but the call triggered a popular upsurge in several parts of India and even gave rise to four parallel governments – Ballia in UP, Tamluk in Bengal, Talcher in Odisha and Satara in Maharashtra. The Satara parallel government in fact lasted till 1947, becoming the historical bridge between the Quit India movement and the final exit of the British colonial rulers.

History has however played a cruel joke on India. Power has passed into the hands of forces whose predecessors had not just stayed away from the freedom movement but collaborated with the colonial rulers during various phases since the 1857 war of independence. In 2014 Narendra Modi came to power with the call of a ‘Congress-mukt Bharat’, an India free from the Congress. Today Home Minister Amit Shah boasts about the BJP ruling India for fifty years and BJP President JP Nadda talks about the BJP becoming the single party in India! Opposition ruled governments are being destabilised and toppled one after another, opposition party offices are being raided and encircled by the police and opposition leaders are being harassed relentlessly by the ED.

When the Constitution and National Flag were being adopted, RSS had explicitly rejected both, insisting on recognising the Manusmriti as India’s foundational code and the saffron flag as India’s national flag. The RSS opposition to the constitutional direction of free and modern India was not confined to just ideological polemics. It did everything possible to destabilise and derail the fledgling republic. The assassination of Gandhi was part and parcel of this larger conspiracy. Another conspiratorial event happened in Ayodhya on the night of 22 December 1949, just a month ahead of the formal enforcement of the Constitution on 26 January 1950, when a Ram idol was clandestinely installed in the Babri Masjid with the blessings of the Ayodhya City Magistrate Guru Dutt Singh and District Magistrate KKK Nayar, both of whom subsequently joined active politics under the banner of the Bharatiya Jan Sangh, the organisational predecessor of today’s BJP.

It is pertinent to remember the words of Sardar Patel, India’s first Home Minister, who had to ban the RSS in the wake of the Gandhi assassination. The communique issued by the Government of India made it clear that the ban was necessitated to root out the forces of hate and violence that were putting the nation in peril. In his letters to Shyama Prasad and Golwalkar, Patel took note of the communal poison being spread by the RSS and its disastrous consequences which claimed many lives including that of Gandhi. The ban was eventually lifted on 11 July, 1949 after the RSS had given in writing its acceptance of the Constitution and the National Flag. The communique issued while lifting the ban expressed the hope that the RSS, as promised, would function as a democratic organisation in the cultural sphere, eschewing secrecy and abjuring violence. With the ban lifted, the RSS of course went back to its old ways as India has been experiencing at such great cost.

Today the Modi government is using the 75th anniversary of India’s independence as a mega opportunity to distort history and hijack icons of India’s freedom movement. It has amended the Flag Code to turn the flag into a business item, removing it from its history as a symbol of struggle for self-reliance and revival of India’s once thriving handloom industry which was decimated by the British colonial rule to promote Britain’s cotton mills. It has also robbed the word Azadi of its core meaning. Azadi in our freedom movement meant not just freedom from colonial rule but also freedom from all kinds of social bondage and oppression. From the status of a subject people under British rule and various kingdoms, we, the people of India became free citizens of a free country with the adoption of India’s Constitution. Today all these liberties of Indian people are at stake. Citizens are being persecuted for telling the truth, seeking justice and demanding rights. In spite of the trauma of Partition, India had resolved to move on as a secular democratic republic respecting the social diversity and composite culture that defined the Indian mosaic. Today that very resolve is being sought to be reversed as the constitutional goal of a sovereign socialist secular democratic India is being effectively replaced by the century-old dream of the RSS of turning secular India into a fascist Hindu Rashtra.

As part of our sustained ‘We, the people of India’ campaign to celebrate the 75th anniversary of India’s independence, let us therefore observe a special weeklong campaign from 9-15 August to renew our resolve to build the India of the dreams of our great martyrs. We, the people of India have one mission – Save our Freedom, Democracy, Constitution!