Simultaneous Elections Proposal Undermines the Basic Spirit of Democracy and Federalism Enshrined in the Constitution: CPIML

The proposed constitutional amendments to facilitate simultaneous elections amounts to a literal rewriting of the constitution and violates it's basic structure.
ELECTION 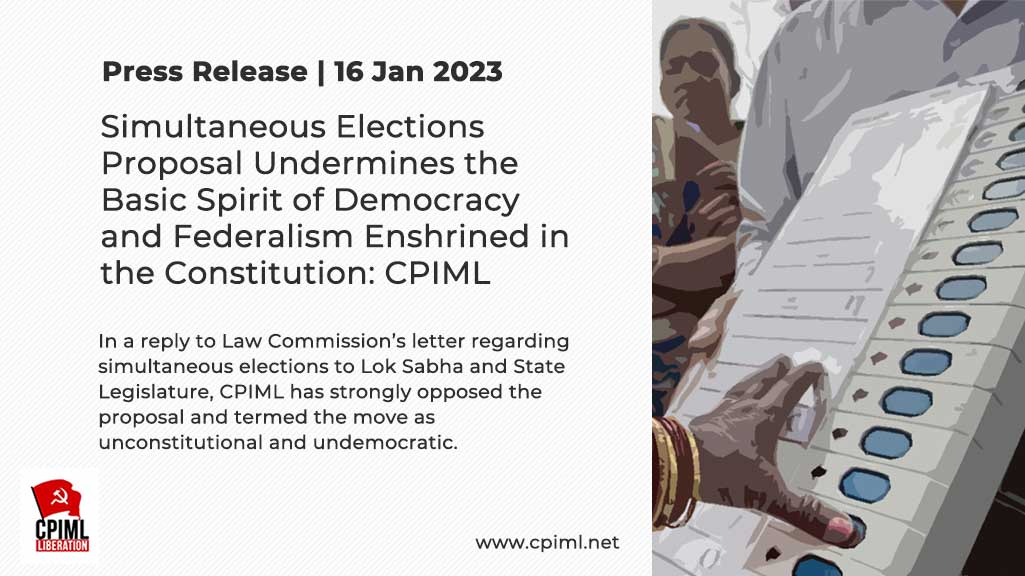 The Law Commission in a letter dated 23 December 2022 has called for views from various stakeholders despite a similar exercise undertaken in 2018, which was opposed by several political parties as undemocratic. This renewed push for simultaneous elections, rather ‘One Nation, One Election’, which is the pet idea of the BJP undermines the basic spirit of democracy and federalism that constitutes the lifeblood of the Constitution. Today in the name of ‘One Nation, One Election’ the BJP wants to set the political clock back and enforce a regimentation of the polity through constitutional amendments. Unfortunately. the Law Commission, seems to have been swayed by the BJP’s agenda.

The Law Commission’s own observation [in 2018 Draft Report on “Simultaneous Elections” ] indicates, “The main reason behind the synchronised elections till then [mid 1960s]  was the dominance and rule by one National political party and the regional parties were not powerful and influential.” The fact that the BJP today has acquired the kind of electoral dominance that the Congress used to enjoy fifty years ago cannot be the basis for amending the Constitution and turning the clock back. The BJP of course openly harbours the ambition of becoming India’s ruling party, in fact the only party, for the next fifty years. But the constitution must not be amended to suit the ruling party’s political ambitions.

Assembly and Parliament elections have their own specific contexts as do the panchayat and municipal elections. Clubbing elections together for logistical considerations will mean stripping Assembly elections of their autonomous domain and making them subordinated to the central context. The assumption that holding simultaneous elections would make for logistical convenience and financial savings is not backed by any credible study or analysis of election expenses or logistical arrangements (which the draft report also acknowledges). This brings into question any conclusions drawn by the Law Commission on financial implications.

Furthermore, as per the Law Commission’s draft report about 3586 crores was the cost incurred by the ECI on the 2014 elections (para 2.10). To put this in perspective, since the BJP came to power at the Centre in 2014, the Union government has spent ₹3,260.79 crore on advertising in electronic media and ₹3,230.77 crore on advertising in print media. If money is truly to be saved, the scope clearly lies elsewhere. Expenditure cannot be made a prime consideration in pursuing the core principles of democracy.

The Law Commission makes a rather disingenuous argument around MCC to seek justification for its proposal for simultaneous elections. This is rife with blatant contradictions. MCC does not interrupt or slow down development; it only places certain restrictions on the government to stop it from influencing the voters with announcements of new projects and policies. Elections enable the people to have a say and express their opinion about a government or its so-called development activities. Portrayal of MCC as an impediment to development militates against the centrality of the people in a democracy by creating an artificial contradiction between  governance, and,  the people’s right to choose their representatives and express their opinion about any government and its performance or so-called development agenda.

The Law Commission undertakes an exercise in erroneous legal interpretation of the doctrine of basic structure with the intention of limiting its scope to make a labourered and untenable argument that the rewriting of the constitution does not amount to a violation of its basic structure.

We therefore appeal to the Law Commission to desist from pursuing this unwarranted and potentially disastrous idea.

CLICK HERE TO READ FULL TEXT OF THE CPIML’S LETTER