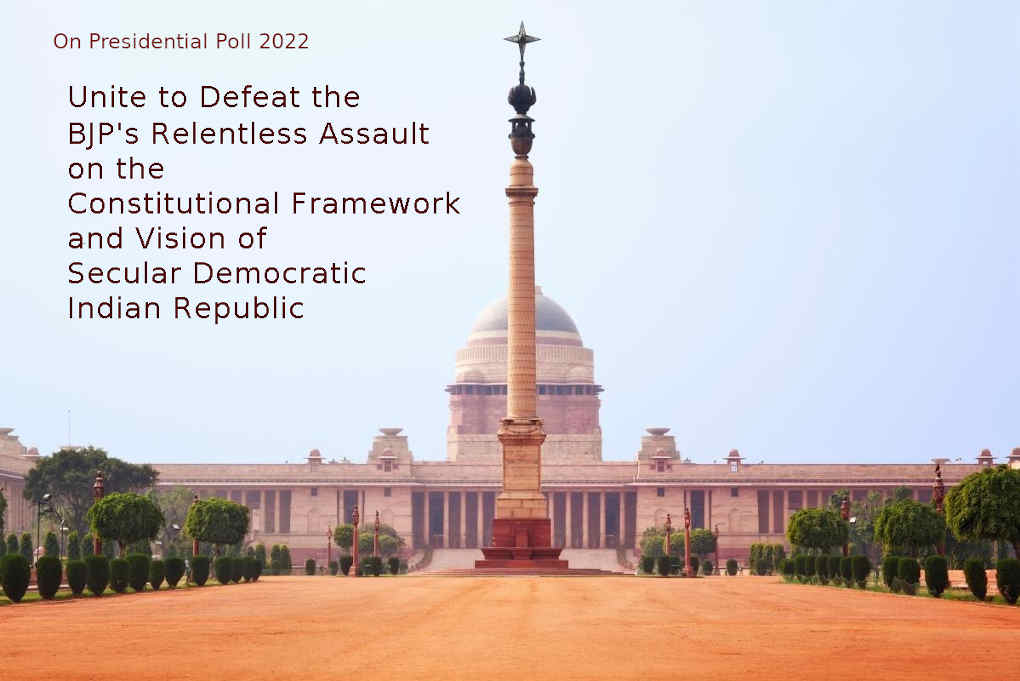 The choice of Yashwant Sinha as the opposition candidate for Presidential election has understandably given rise to a lot of debate and discussion in progressive circles. For much of his political career he has been associated with the BJP. He was a senior minister in the Vajpayee cabinet, but became a dissenting voice within the BJP in the Modi era before leaving the party in 2018. Prior to joining the BJP he began his political career as a close associate of former PM Chandrashekhar and after quitting BJP in 2018 he had joined the Trinamool Congress and was its National Vice President before resigning for the Presidential contest. Obviously his choice as the opposition candidate for the Presidential poll is based on his current political stand and role as a critic of the dictatorial Modi regime.
The process of consultation among opposition parties regarding the Presidential poll began quite belatedly. The first meeting held on June 15 resolved to field a common candidate and the second meeting held on June 21 announced the candidature of Mr Sinha. The concerns raised in progressive circles point to the need for more wide-ranging consultations in the effort to build opposition unity, not just among the political parties, but also among the ongoing peoples’ movements, which are playing a key oppositional role on the ground. Such consultations and discussions would further strengthen and enrich the emerging opposition unity.

Some friends have also raised concerns regarding Mr Sinha’s alleged association with the Ranveer Sena (as suggested by some Ranveer Sena members in a Cobrapost sting operation). It is well known that the Ranveer Sena had the fullest backing of the Sangh brigade and the governments of the day in Delhi and Patna failed to check it. It is the sustained movement of the fighting people of Bihar which has successfully overcome the Ranveer Sena phase and today we have to face a bigger threat in the form of the BJP's bulldozer raj. Our allies must be chosen on the basis of who stands on which side today.

The key consideration for the Left in the Presidential poll is the coming together of a broad spectrum of opposition parties which must now be carried forward in a more systematic, determined and dynamic manner. While fully upholding the cardinal role of ideological clarity and boldness in resisting fascism and focusing on building sustained struggles on the ground, it is important to forge effective unity among the broadest possible range of opposition parties to avoid division of non-BJP/NDA votes. It is in this spirit of building effective opposition against the Modi government that the CPI(ML) and other parties of the Left have chosen to endorse the candidature of Yashwant Sinha as the common opposition candidate.

The Presidential poll must not be seen as a personality-based contest between two candidates, like the Lok Sabha and Assembly elections, it too must be seen as a political and ideological contention against the fascist camp. The need of putting up a united opposition has never been so compelling as in today's context of facing the BJP's bulldozer raj and brazen corporate plunder. While supporting the united opposition move, CPI(ML) will continue to strive to orientate the opposition unity towards a sustained political campaign on a common democratic agenda.

We appeal to the entire Party as well as its well-wishers to campaign for the victory of the joint Opposition candidate in the upcoming Presidential polls. We appeal to all non-BJP parties to appreciate the gravity of the current juncture and come together to save the Constitution and the federal, democratic, secular framework of our Republic from the relentless assault of the Modi government and the Sangh parivar. We appeal to the people of the country and all the ongoing movements to ask their respective MLAs and MPs to vote against the BJP in the Presidential poll.