Skip to main content
No To Communally Targeted Evictions in Assam, Detention Camps in Bihar 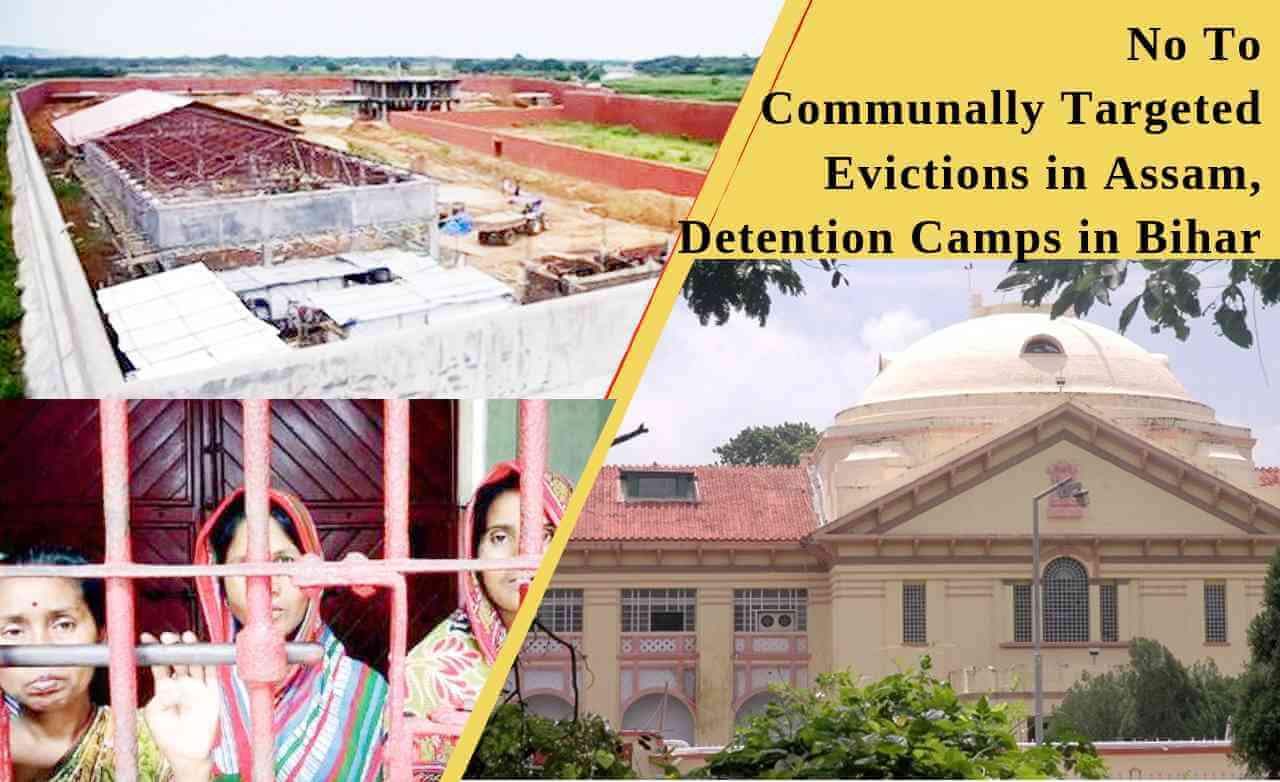 Amidst heavy monsoons and flooding, as well as the Covid-19 pandemic, hundreds of households (overwhelmingly those of East Bengali-descent Muslims) have been violently evicted from their land and homes in Darrang in the Char-chapori (sand bar) regions of Assam. The BJP Government is conducting a series of such eviction drives on the heels of a communal and xenophobic campaign about “encroachment by illegal immigrants”. 259 such families were evicted between June and August. On September 20, 200 families, all Muslims of East Bengali descent whose ancestors have lived in Assam for generations, were evicted and their huts bulldozed in Fuhuratoli in Darrang District. They were given just a day’s notice prior to eviction; and were offered no means of rehabilitation. Four mosques were also declared “illegal” and bulldozed: displaying a clear communal intent.

Assam’s Brahma Committee report and the Land Policy 2019 paved the way for this communally and ethnically targeted eviction policy. These had proposed to redistribute lands in the char areas, which they claimed are occupied by “illegal immigrants”, among “indigenous peoples of Assam.” The government’s definition of who is “indigenous” is unclear - and there are apprehensions that it excludes communities of certain ethnic origins and religious identities.

Meanwhile, in Bihar, a Patna High Court bench has raised the bogey of “illegal migrants” and ordered the Bihar government to construct a permanent detention camp, and to use  digital and print media to alert the state’s residents and incentivize them to become informants against  “foreigners living illegally”. Such an order threatens communal harmony in the state, and encourages Bihar’s people to look with suspicion, fear, and hatred towards religious and linguistic minorities. Moreover, there is no factual basis for the court’s order, which was passed while hearing a petition of a trafficked woman from Bangladesh who had pleaded to be allowed to stay in India and attempt a new and safe life. The court deported this victim of trafficking, and then used this case of a trafficking victim to raise the bogey of “foreigners” choosing to “illegally migrate” to India. Even the NDA Government in Bihar has declared in an affidavit to the court this January, that there are just 38 undocumented “foreigners”, mostly from Nepal, living inside jails or remand homes in the state. In spite of this, it is deeply disturbing that district authorities in the border district of Kishenganj are citing a letter from Bihar’s Home Department, to justify vigorous propaganda in electronic and print media “sensitizing people” in border areas and “associating the public spirited persons/N.G.O’s for deportation of illegal migrants”. Such plans are tailor-made to give official sanction and cover to ongoing communal campaigns by RSS outfits seeking to instigate Hindus in the Seemanchal region against Muslims.

Detention camps and communally targeted evictions are part and parcel of the BJP’s fascist policy that aims to strip Muslims all over India of citizenship, land, and livelihood, relegating them to life and death inside concentration camps. Indians committed to safeguarding democracy and equality in India must protest such fascist actions with all their might.