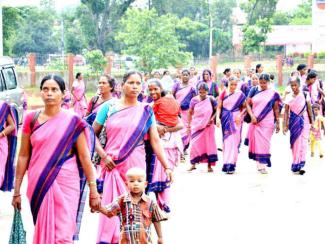 Hunger feels like pincers, like the bite of crabs;
it burns, burns, and has no fur.
Let us sit down soon to eat with all those who haven't eaten;
let us spread great tablecloths, put salt in lakes of the world,
set up planetary bakeries, tables with strawberries in snow,
and a plate like the moon itself from which we can all eat.
For now I ask no more than the justice of eating.
-  “The Great Tablecloth” Pablo Neruda

On April 25, 2022, the Supreme Court passed an important judgment in the case of Maniben Maganbhai Bhariya vs. District Development Officer Dahod and Others, holding that Anganwadi Workers (AWWs) and Anganwadi Helpers (AWHs) are entitled to the benefits under the Payment of Gratuity Act, 1972. This judgment, recognising  Anganwadi workers and helpers as workmen and their legal right to gratuity, in itself, represents a major victory  for the nation-wide movement of the Anganwadi workers and helpers and is a result of their fearless struggle over the past few decades. Most recently AWWs/AWHs, across the country, participated in great strength in the nation-wide General Strike on March 28-29, 2022.

The facts of the case are necessary to understand the determination with which Maniben Maganbhai Bhariya and four other AWWs and AWHs have pursued this litigation. The five of them joined as Anganwadi workers/helpers between the period 1982-1985 and served for 21-31 years and stood retired between February 2006 and February 2012. When gratuity was not paid to them, each of them filed their applications before the Controlling Authority under the Payment of Gratuity Act, 1972, which granted them gratuity by holding that Anganwadi Workers (AWWs) and Anganwadi Helpers (AWHs) are entitled to gratuity. The said order was challenged by the State before the Appellate Authority, which dismissed these appeals and confirmed that the AWWs/AWHs are entitled to gratuity. The State further challenged this before the High Court of Gujarat, wherein the Single Bench dismissed their case vide judgment dated 6th June 2016. However, the State further challenged the Single Bench order before the Division Bench of the High Court of Gujarat, which allowed the State’s appeal. The Division Bench vide judgement dated 8th August 2017 held that AWWs/ AWHs could not be said to be employees and the ICDS project cannot be said to be an industry. Further it held that as the remuneration or honorarium paid to them cannot be treated as wages, they are disentitled to gratuity.

It is this judgment dated 8th August 2017 that these workers and the Gujarat Anganwadi Karmachari Sangathan challenged in the Supreme Court, which has now held that AWWS/AWHs are entitled to gratuity. The Supreme Court, thereafter has directed that the State of Gujarat shall, within a period of three months from the date of the judgment (25th April 2022), take all necessary steps by the concerned authorities to extend benefits of the said Payment of Gratuity Act, 1972 to the eligible AWWs and AWHs in the state of Gujarat and further directed that all eligible AWWs and AWHs shall be entitled to simple interest @ 10% per annum.
Besides upholding this right to gratuity of the AWWs/AWHs, there are certain crucial aspects of this Supreme Court judgement which need to be emphasised.

The fundamental issue though is the resistance put up by the BJP Governments at the Centre and State to the struggle of the AWWs and AWHs, even in Court. The abovesaid findings of the Supreme Court were in rejection of the arguments forwarded by Advocate Aastha Mehta, who appeared on behalf of the State of Gujarat and Ms. Aishwarya Bhati, the Additional Solicitor General who appeared on behalf of the Union of India. The fundamental aspect cannot be ignored, that the BJP government fought tooth and naila against AWWs/AWHs getting their due rights. Indeed, this judgment affirms that the BJP governments at the Centre and State have suffered a telling blow at the hands of the sustained struggle of the AWWs and AWHs. The BJP government at the Centre must respect the conclusions of the Supreme Court, and the demands of AWWs/AWHs and immediately take all necessary steps to recognise grant them status of employees, revise their wages and declare better conditions of service on par with government servants.

We can safely assume that the BJP government will not do this and a big battle lies ahead. Intensified struggles must be waged to compel the BJP to obey the Supreme Court order and meet the demands of AWWs/AWHs.