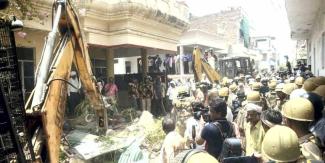 From hate speech to state-led terror, resist the trajectory!

The storm triggered by the Islamophobic bigotry and derogatory remarks against Prophet Muhammad by well-known BJP national spokesperson Nupur Sharma and the party's Delhi media head Naveen Kumar Jindal is fast turning into a wave of targeted state-led terror campaign against Indian Muslims and voices of dissent. The remarks had understandably sparked a major international controversy. In the wake of strong condemnation by a whole range of countries from Qatar and Saudi Arabia to Iran and Malaysia, the threat of boycott of India and Indian goods, the Modi government had dumped the BJP spokespersons as 'fringe elements', suspending or expelling them from their BJP membership.

This is the vintage RSS strategy followed at every critical juncture over its nearly century-old existence. Following the assassination of Gandhi, RSS was quick to disown Godse even as its ranks celebrated the assassination. When Sardar Patel banned RSS to stop this ominous communal threat, the RSS promised to change tack and function as a cultural organisation. When Golwalkar's core text "We, or Our Nationhood Defined" revealed the fascist ideological birthmarks of RSS and openly idolised Hitler and his Nazi model of nationalism based on the notions of 'racial purity and pride' and aggressive pursuit of genocidal antisemitism, RSS sought to distance itself from this text by casting doubts about its authenticity! It thought, it could similarly get away with the remarks made by Nupur Sharma and Naveen Kumar Jindal by just shielding them temporarily as fringe elements.

But if the Modi regime and the Sangh-BJP establishment thought it could hoodwink either the world or the people at home with this blatant 'fringe element' lie, they were clearly mistaken. The popular social media text squarely nailed the lie: 'gali gali mein shor hai, fringe nahi yeh core hai' (everybody knows it for sure, the so-called fringe constitutes the core). The government has been reminded that it owes an answer and apology first of all to the people of India and the Indian Constitution as to why leaders and spokespersons of the BJP and Sangh Parivar are being allowed to indulge in hate crimes with utter impunity, why BJP spokespersons who had to be dumped by the party are not being arrested and prosecuted for their hate speech and bigotry.

The protests going on across India are asking these urgent questions. The protests have been particularly big on June 3 and 10, following large congregations for Friday prayers. True, there have been a few violent incidents of stone-pelting and arson, and some prolonged road blockades in the course of the protests. In West Bengal where the administration is being criticised for inaction and ineptitude in handling such situations, while everywhere else the story is that of excessive police repression and administrative vendetta. The point is that stone-pelting, arson, and road blockades have always pretty common in spontaneous public demonstrations in India – and the police are trained to handle these using methods of crowd-control that are both effective and non-lethal. When arson and stone-pelting by the Hindu- and Rajput-supremacist Karni Sena protesting the film Padmaavat is not met with bullets, beatings, and bulldozers why is the same meted out to Muslims protesting Islamophobia?

The police firing in Ranchi that killed at least two young men - Mohammad Mudasir and Mohammad Sahil and injured over twenty others, brutal lathi-charges in Uttar Pradesh and demolition of Parveen Fatima's home in Allahabad and a two other homes of Muslims in Saharanpur - this is how the BJP-dominated Indian state seeks to deal with the ongoing protests. And as the Ranchi example tells us, the repressive role of the police and other organs of the state is not limited to just BJP-ruled states. The widely televised demolition of Parveen Fatima's home and several other houses starting with the Khargone episode two months ago shows us not just how the BJP in power chooses its demolition targets but also turns the demolition into a spectacle and festival of terror and destruction.

The message the Modi regime wants to send out is aimed primarily at the Muslim community, but it is clearly meant for all voices of dissent. Protesters will no longer enjoy the constitutional commitment of fundamental rights, they will have to accept the risk of facing brutal police repression, spending years in jail in false cases or even losing their homes to demolition brigades and own lives to police firing, lynch mobs or hired assassins. This is a brazen travesty of the constitutional framework of rule of law, but this is fast becoming the 'new normal' in Modi's India.

It is not difficult to understand the Muslim state of mind at this unprecedented juncture of Indian history. Derogatory remarks about Prophet Muhammad are always hurtful, and when such remarks constitute and define the dominant political discourse, and are coupled with everyday exclusion, humiliation and persecution felt by the community, the situation becomes absolutely alienating. Communists and all other secular democrats will have to stand firmly with India's beleaguered minorities and forge bonds of fighting unity and solidarity to rebuff this fascist aggression and defend India's democracy, shared historical legacy and cultural pluralism with all our might.