Linking Aadhaar To Voting Is An Attack On Voting Rights 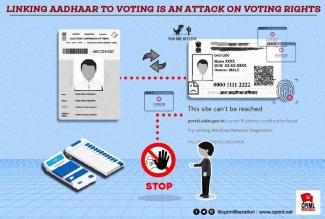 The passing of the The Election Laws (Amendment) Bill 2021 in the Lok Sabha is a dangerous step towards eroding India’s democracy. This proposed amendment seeks to link voting rights with Aadhaar verification. Like so many other anti-people laws, this amendment too was bulldozed through the Lok Sabha by a voice vote, overriding the demand by many Opposition MPs that the Bill be referred to a parliamentary committee that could reflect on its implications and consult experts.

The historic Constitutional Bench judgment of 2017 had upheld the Right to Privacy as a fundamental right – something the Government of India had denied in its defence of the Aadhaar Unique Identification programme. In 2018, the Supreme Court had upheld the Constitutional validity of Aadhaar but had restricted its use to state-run welfare programs, and had upheld a 2015 SC order halting the National Election Roll Purification and Authentication Programme, which had sought to link Aadhaar with voter IDs. In 2018, the governments of Telangana and Andhra Pradesh violated this SC order and linked Aadhaar with voter IDs – as a result at least 55 lakh voters were arbitrarily deleted from voter rolls.

Already, Aadhaar linkage has already resulted in mass exclusion of the poor and needy from PDS rations and MRREGA benefits, due to technological failures, even leading to deaths from starvation. Aadhaar linkage has already led to large scale deletion of voters in Telangana and Andhra Pradesh. Further, it is clear that Aadhaar will link voter identification to the mobile phone and thus to social media, and will inevitably enable profiling of voters based on their social identity, political views and other preferences. This will allow for manipulation of voter rolls and deletion of voters based on such political and social profiling. It will also put the voters at the mercy of ruling party intimidation and allurement, since the ruling party can use Aaadhaar to control access to welfare schemes as well as voting rights.

The Government’s claim that Aadhaar linkage will be “voluntary” is deliberately misleading. Linking Aadhaar to voting will make it mandatory, just as linking it to welfare schemes has ended up making Aadhaar mandatory. The claim that Aadhaar can “clean up” databases is ridiculous since Aadhaar itself has proven to be full of human errors as well as fraud: in fact, more so than electoral rolls.

Aadhaar is not proof of citizenship. Linking it to voting will be a blow to democracy. This move to strangulate democracy must be resisted tooth and nail. Scrap Aadhaar! Say no to linking Aadhaar to voting!