On CPI(M)’s Review of the 2021 West Bengal Elections 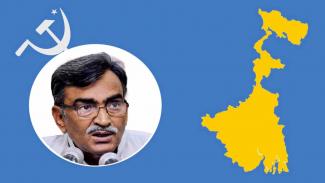 Two months after the announcement of the West Bengal poll results, CPI(M) state secretary and polit bureau member Surjya Kanta Mishra addressed a Facebook live programme on 7 July. His nearly two-hour-long address came in the wake of two months of organisational review of the West Bengal poll outcome at different levels of the party organisation and mass organisations led by the party. The address thus can be seen as a public articulation of the CPI(M)’s essential election review.

The address sought to place the election review in the emerging post-poll context of West Bengal, which partly explains the extraordinary length of the address. But the listeners were obviously more interested in getting a sense of the CPI(M)’s own assessment of the situation and explanation for its weakest ever poll performance in West Bengal. The address has widely been reported in the media as a kind of post-poll volte face, but if one really listens to the whole speech it becomes clear that while the state secretary did offer a few explanations and admitted a few mistakes, the silence about the unacknowledged and unanswered questions remained more eloquent than the explanation, and the answers only gave rise to new questions.

Let us first take a quick look at what he said, especially the admissions that have now been made official for the first time. The address clearly admitted that the CPI(M) had actually been facing a relentless dip in its vote share since 2008 panchayat elections (observers of West Bengal politics will remember that this was the first panchayat election after Singur and Nandigram). The decline took the most serious proportions in 2019 when the CPI(M) and its LF allies not only failed to win any LS seat, but as Mishra pointed out, also failed to lead in any Assembly segment either. So, in a way, 2021 only reinforced the 2019 pattern with an increase in CPI(M) votes in 94 of the 130-odd seats compared to 2019.

To counter this decline, the CPI(M) had tied up with the Congress in 2016, and additionally with the ISF/RSMP in 2021. The Congress overtook the CPI(M) in 2019, and the RSMP secured the lone seat won by the Left-Congress-ISF combine in 2021. In other words, the alliance strategy once again failed to revive the CPI(M)’s electoral fortunes. Mishra did not get into a discussion over the CPI(M)’s choice of allies in West Bengal except indicating that the party would like to continue with the alliance it forged in the elections. What was more conspicuous was his silence over the CPI(M)’s stark tactical debacle, its failure to win a single seat when it campaigned for formation of an alternative government.

The keyword used in the address to explain the situation is polarisation, of course not in the sense of communal polarisation, but political or electoral polarisation between the BJP and TMC. The dominant media is of course duly blamed for promoting this polarisation, but then it has always been difficult for any third force to get due space in the dominant media. In fact, what is new is not polarisation but the kind of exclusive or unipolar domination that the BJP enjoys in the mainstream media, nationally and in most states. West Bengal is rather exceptional where the BJP still does not enjoy that kind of domination at least in large sections of the print media.

The question that needs to be discussed is not so much the level of polarisation in West Bengal which became strikingly manifest in 2019 itself, but what the CPI(M) did to counter this polarisation. The CPI(M) tried to wish it away by lumping the two popularly perceived poles together into a single category, gave it a catchy name ‘bijemool’ (BJP+Trinamool), repeatedly talked about the equivalence of the two poles, and posited itself as the only alternative. The backdrop of the February 28 rally said so explicitly and loudly: ‘amrai bikalpo, amrai dharmaniropekkho, amrai bhabishyat’ (we alone are the alternative, we alone are secular, we alone are the future).

The poll results in fact reflected a heightened polarisation with the TMC increasing its vote share by 5% even as the BJP vote share remained more or less intact, dropping only by 2%, and this clearly meant a total defeat of the CPI(M) strategy to counter the polarisation. If the BJP, a fascist party, constitutes one of the two poles, then the primary position of the CPI(M) in West Bengal has to be anti-BJP. Mishra tells his listeners that the CPI(M) had declared 22 years ago that the BJP could not be equated to or bracketed with any other party. How come then in West Bengal, one of the CPI(M)’s strongest bastions where it held power for 34 years, the TMC was effectively held to be the bigger enemy for all these years? He tells us how the BJP/RSS encouraged and helped in the formation of the TMC in West Bengal and the two were actually direct or indirect allies till 2019.

So what really changed in 2019? The Modi government came back to power for its second successive term and unleashed its fascist agenda with such rapidity and aggression that the entire country and the world sat up and took notice. From Operation Kashmir and Ram Mandir to the discriminatory amendment to citizenship law and the imposition of new farm laws and labour codes to serve corporate interests, the Modi government is implementing the RSS dream agenda of transforming secular democratic India into a fascist Hindu Rashtra at breakneck speed. Every election since 2019 has been about dethroning or defeating the BJP. It was the CPI(M)’s inability to see this basic truth and adopt a firm anti-BJP position which actually enabled the TMC to almost exclusively appropriate the anti-BJP space, buck the anti-incumbency and increase its vote share by as much as 5%.

This anti-BJP polarisation is perfectly understandable, especially in a state like West Bengal after the BJP had unleashed a no-holds-barred campaign to conquer the state. The whole of India understood the ominous implications of a BJP victory in West Bengal. Leaders of the farmers’ movement in Delhi rushed to West Bengal with a fervent plea to the West Bengal electorate to defeat the BJP. Large sections of Bengal’s Left and liberal camp also felt the absolute urgency of stopping the BJP. The eventual outcome reflected this collective concern and the entire country heaved a huge sigh of relief as West Bengal gave a decisive rebuff to the BJP’s aggressive bid for power. The BJP game plan of completing its mission of sealing its domination over the entire eastern and north-eastern region has been foiled, at least for the time being.

Professor Prabhat Patnaik, while expressing his delight at the Bengal outcome, has described the poor showing of the CPI(M) as the price that had to be paid for the larger objective of defeating the fascist forces. This sounds rather deterministic: the CPI(M) certainly did not choose to pay this price, and such an exorbitant price could surely have been avoided. Is it too difficult to imagine the CPI(M) retaining its presence as a significant, if not the leading, opposition in a state where the party was in power with a massive majority only ten years ago? The CPI(M) has often won a few seats in Rajasthan in polarised elections, the CPI(ML) too won three seats in Bihar in 2015 or more recently in Jharkhand in highly polarised contests. If a communist party has powerful pockets of grassroot work and is seen as a fighting force against the main adversary, it can locally defy the statewide polarisation and have a good chance of winning a few seats. It holds good not just for communist parties but for small parties in general. This is the question that both Mishra and Patnaik do not really address.

Mishra would like us to believe that the CPI(M) got it right about the TMC being in league with the BJP till 2019, but things changed thereafter. What exactly did the TMC do that the CPI(M) failed to read and assess properly? The TMC tried to address the growing anti-incumbency by redesigning its mass outreach and articulation and firming up its anti-BJP posture. The CPI(M) kept rubbishing the TMC government’s populist schemes as theft and alms, and kept equating the TMC with the BJP, even going to the extent of suggesting a TMC-BJP government in the event of a hung assembly.

There must be some deeper reasons for such an abject misreading of the situation. There is a fundamental reluctance and inability on the part of the CPI(M) to come to terms with its loss of power in West Bengal. The first thing to realise is that it was no conspiracy that ended the CPI(M)’s prolonged uninterrupted reign. The party had committed major mistakes and the people had got sufficiently disillusioned and desirous of change. In fact, Mishra now traces the decline not to 2011 but to 2008, even though the CPI(M) in West Bengal may like to see 2008 not so much in the context of Singur and Nandigram as in the context of the Left’s withdrawal of support from the UPA government over the Indo-US nuclear deal and the subsequent Congress-TMC realignment in West Bengal.

It should also be realised that the very fact that the TMC came to power riding on the Singur-Nandigram agitation, accommodating sizeable sections of the rural poor, rural and urban middle class and the intelligentsia who were long-standing supporters of the Left, determined that it could not follow the typical trajectory of a regional party, certainly not the type of Naveen Patnaik’s Biju Janata Dal. The irony is while the TMC feels compelled to take a vocal anti-BJP stand, the CPI(M) has ended up diluting its anti-BJP thrust, thereby handing over the anti-BJP vote on a platter to the TMC. This, coupled with the steady migration of blindly anti-TMC forces from the CPI(M) to the BJP, has reduced the CPI(M) vote share from the formidable heights of 40-50% to only about 4-5%.

Be that as it may, it is good to see the CPI(M) belatedly acknowledge the fact that something has surely gone wrong somewhere. And rather than blaming the whole thing on organisational deficiency, it has also accepted some political-tactical gaps. Is it only to reconcile with the emerging political reality of opposition unity where the CPI(M) will have to work with the TMC in national politics? Or is there really an attempt to address the changed reality in West Bengal for the sake of a Left resurgence? For the latter to happen there will have to be deeper introspection and course correction. And there has to be more humility. The arrogance with which the dominant social media contingent of the CPI(M) attacked and virulently trolled every different opinion from within larger Left and democratic circles was just a repeat of the party’s arrogance during the Singur-Nandigram period which played a big role in the Left Front government’s eventual downfall. Will the CPI(M) be more careful next time?