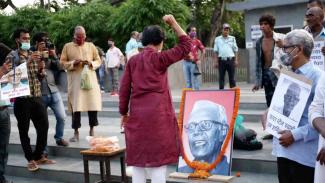 The death of octogenarian human rights defender Fr Stan Swamy is a cold-blooded custodial killing. It was clear as day to all that prison was likely to prove a death sentence for an elderly, frail man with Parkinson’s disease, especially during the Covid-19 pandemic. By arresting him and imprisoning such a man as an undertrial, the National Investigation Agency (NIA) knowingly and deliberately sought to take his life. The courts, whom Fr Stan repeatedly told that his life was in danger and he would not live long in prison, displayed a shocking degree of callousness, and failed in their duty to protect him from the lethal NIA strategy. Fr Stan, denied even a straw to sip liquids, unable to walk without help, infected by Covid-19, was denied bail over and over by courts. Such treatment is custodial torture, which took his life. Ironically he passed away even as the farce of yet another bail hearing was underway.

We know that the Bhima Koregaon accused were targeted using Pegasus and Netwire software to plant evidence on their computers and phones – evidence that was then used to fabricate  pretext to arrest them. Father Stan has been killed as a result of this conspiracy.

The NIA knows full well that not a single one of the Bhima Koregaon accused will ever be found guilty by a court once a trial is held. So their strategy is to delay the trial indefinitely and use the Supreme Court’s interpretation of UAPA to torture human rights defenders in prison, for their remaining lifetime. The pandemic only increases the chances that these activists, elderly or not, could die in this process. Meanwhile the Government says “let the law take its course” - confident that the very course of the law, thanks to apathetic and weak-willed courts, can kill those whose work exposes the government’s crimes.

The Delhi HC, granting bail to three student activists accused under UAPA, rightly warned that democracy is in peril thanks to a government that equates protests with terrorism. Fr Stan’s custodial murder must be a wake up call for Indians everywhere. The investigative agencies and courts cannot between them be allowed to take the lives of human rights defenders and dissenting voices. We must not rest till all the Bhima Koregaon accused; those accused in the Delhi riots case; adivasis, Dalits, Muslims, journalists, Left activists jailed indefinitely under draconian laws; and all other political prisoners are free. We must demand justice for Fr Stan and ensure that the government responsible for his killing faces punishment in the court of the people. That would be the most fitting tribute to Fr Stan’s memory.

Impoverished Adivasis Hunted as Criminals: A Study of Jharkhandis alleged as Naxalites

(Excerpts from a Report co-authored by Father Stan Swamy, published by the Bagaicha Team based in Ranchi)

This study discloses several undisclosed, striking realities about alleged “Naxalite” under-trials in Jharkhand. Disproportionately large numbers of Adivasis, Dalit and other backward castes have been trapped in several false cases especially when they try to assert their constitutional and human rights…This argument is corroborated by discussing the very poor responses from Jharkhand’s jails to petitions served under the Right to Information Act 2005, presenting relevant data gathered from 102 alleged Naxalite under-trials from eighteen districts of Jharkhand and by sharing personal experiences of several alleged Naxalite under-trial detainees in Jharkhand’s jails…These persons have been alleged as Naxalites and foisted cases mostly under section 17 of the Criminal Law and Unlawful Activities (Prevention) Act 2004.

A summary of the significant findings of the study in quantitative terms is as follows.

Arrest of about 93 per cent of all respondents has taken place during the last 15 years i.e., between 2001 and 2015. The highest number of arrests occurred between the year 2010 and 2013. Regarding the location of arrests, the data shows that about 57 per cent was arrested from their homes; 30 per cent was arrested from nearby towns or on journey; 8 per cent had surrendered at the court after being informed by the police about their being charge sheeted. Five per cent of the respondents was summoned to the police station to be arrested. At the time of interview, 84 per cent of all respondents was under trial. They continue to attend courts on a regular basis. About five per cent of them has stopped attending the court after being bailed out due to fear of being harassed by the police again although their cases have not yet been disposed of. About six per cent of them is still in prison.

One of the most significant findings of the this study is that 97 per cent of all 102 respondents, who were accused as being Maoists or ‘helpers of Maoists’ reiterate that the allegations by the police is wrong and their arrests and imprisonment were based on misinformation. Other significant findings of the study is that a large number of fake cases under the draconian 17 CLA Act, UAPA and the anti-state sections of the IPC have been foisted upon the Adivasis, Dalits and the other backward classes in various parts of Jharkhand, particularly within the last decade; that all this is part of the gross misuse of the criminal justice system by the state which favours only the rich and powerful to the detriment of the poor and downtrodden, and is now more and more unscrupulously in favour of the take-over of the economically poorest people’s land and the nation’s resources by both multinational and domestic corporates (corporatization); that local vested interests at times do act hand-in-glove with the police to foist such fake cases against innocent people with whom they might have some scores to settle; that in the current system, justice remains very much beyond the means of all such accused; that once implicated in such cases, the threat of further persecution in the form of various forms of harassment, intimidation, re-arrests, etc. persist even after the accused are released on bail; and that even after being released on bail, their cases, mostly false and often fabricated, have been prolonged unnecessarily causing major financial difficulties.

Another dimension of this study exposes the deliberate misuse of criminal justice procedures to repress alleged Naxalite undertrial detainees inside Jharkhand’s jails. This section of the report presents a range of very significant findings: (1) instance of blatant torture while in custody, in gross violation of the rights of prisoners, (2) administrative procedures that amount to blocking and inhibiting pre-trial and trial proceedings while under detention, (3) serial foisting of cases/rearrests, (4) exceedingly faked-up cases that do not deserve cognizance of even arrest, not to speak of case committal, (5) prejudiced denial of bails, (6) under-trial detention amounting to unwarranted conviction, (7) large proportion of acquittals indicates gross misuse of the criminal justice system, and (8) convictions by the lower courts (whether dismissed by the higher courts or not) that reflect upon the sordid state of adjudication.

The prolonged detention and the exceedingly slow pace of progress of cases, especially retarded due to the serial foisting of multiple case, jail transfers on administrative grounds, nonproduction from jails to all the courts on the respective dates of hearing, production through video-conferencing also hindered for months and years on end due to technical failures of the machinery, communication failures and administrative lacunae – all these together result in accused persons being punished for offences which they may not have committed. This state of affairs might also suggest that a large number of people have also been so punished on political grounds of their oppositions to the policies of the reigning state.

…most of the respondents were arrested for reasons of speaking out against injustice done to them or trying to unite themselves against exploitative elements in their villages and localities, which intend to deprive people of their entitlements and rights to land and common property resources in territories that have been constitutionally and legally deemed to be protected for the benefit of Adivasis.

Looking at these processes, most clearly visible in predominantly Adivasi regions, from a broader and historical perspective, these exploitative and oppressive forces work apparently in three mutually supporting patterns: (1) progressive encroachment of land, forests, water-bodies, mineral and other common property resources by state supported neoliberal capitalist corporate groups in the name of “national development” which is a buzzword in India to mask the discursively naturalised processes of sanskritisation, socioeconomic differentiation (along the line of “upper” versus “lower” or “pure” versus “impure” leading to production and naturalisation of graded inequality among Adivasis) and consequent detribalisation animated by political Brahmanism or the Manu system that seeks to advance unrestricted competitive individual pursuit of riches, power and honour. This process has forcibly been accelerated in recent times by the activists of sangh-parivar (a familial name for several Hindu fundamentalist organisations); (2) the longest, most resilient and continued history of people’s resistance movements demanding self-determination and self-rule for Adivasis from all over ‘greater Jharkhand,’ which has been violently suppressed, divided, co-opted and pacified; (3) consequently, in recent times, especially since the liberal reform periods, i.e. from the 1990s, these areas have been characterised by increasing militarisation (deployment of the state’s repressive apparatus – the police and paramilitary forces) – to suppress people’s resistance and simultaneously advance industrial-scale extraction of natural and mineral resources to the perils of already impoverished Adivasis-Moolvasis and the environment; and (4) this, of course, has been accompanied by increasing misuse of almost all criminal (justice) procedure codes and an already crisis-ridden Indian legal system.