The Hathras Moment Is Different From The Delhi 2012 Moment

In the wake of the Delhi bus gangrape in 2012-13, hundreds of young Indians joined the anti-rape movement. Through their rage and exhaustion ran a bright thread of hope: a promise of social awakening and institutional change. For the first time ever, society was tuning into the women’s movement’s concerns about rape culture, victim blaming, and attacks on women’s autonomy in the name of safety. It seemed that the State might, at long last, be forced to acknowledge that existing laws defining sexual violence excluded a whole range of victims’ experiences.

In 2020, with countrywide movements around the alleged gangrape and murder of a young Dalit woman in Hathras, the situation is both similar to 2012 in some ways, and grimly different in others.

This time, too, there is a welcome social awakening to the ugly reality of caste-based atrocities and rapes. But this time, the movement is about keeping alive the flame of social change, of anti-caste and anti-patriarchal awakening in the face of an openly Manuvadi regime determined to snuff out that flame.

In 2012, the Delhi government, the UPA government at the Centre, and the ruling party — the Congress — put on the defensive by protests, responded by trying to show they cared for the victim and her family, and for the larger issue of sexual violence. Party leaders met the victim’s family, acknowledging their grief and sense of betrayal. The Manmohan Singh-led government set up the Justice Verma Committee, which listened patiently to feminists of all kinds: feminist scholars and activists, Dalit feminists, LGBTQ feminists, feminists working in conflict areas, organising against sexual harassment in workplaces, and so on. The Verma Committee recommendations set forth a resounding Bill of Rights for women, challenging governments to address every area of gender-based injustice and violence from the vantage point of what Dr B.R. Ambedkar described as constitutional morality, rather than conservative social morality and mob frenzy. The changes in the law recommended by the Verma Committee were only partially implemented by the government at the time, but still, the legal changes were, with some crucial exceptions, largely a step in the right direction.

In 2020, in Uttar Pradesh and at the Centre, you have a government that feels no need even to make a token gesture towards implementing the constitutional liberties and rights of women and Dalits. Instead, what we have is UP Chief Minister Yogi Adityanath using the full force of the state machinery to impose a Manuvadi caste patriarchal order and punish the anti-caste, anti-rape movement.

Opposition leaders, Dalit and women’s groups are meeting the victim’s family to show solidarity — as they should. But the same media that acted as cheerleaders for opposition parties that participated in anti-corruption and anti-rape movements targeting the UPA government, now accuses the opposition of “playing politics” over rape.

In 2012, the Congress with all its faults, did not try to deny rape, brand the victim a liar, or to spread communal narratives. In 2020, in contrast, the ruling BJP is responding with its classic communal whataboutery. It digs up instances of rape where the accused are Muslim, and asks why we are not protesting on those cases. It asks why we do not protest a rape that happened in a Congress-ruled state.

Naturally, people have protested all those instances of rape. But the reason for the intensified outrage at Hathras lies in the state government’s shameful attempts to cover up the crime itself. In those other instances, have there been community and faith-based panchayats defending those the victim accused of rape? No, that is the hallmark of Yogi-ruled Hathras. Did the police and district administration supposedly use petrol to burn the victim’s body, preventing a dignified cremation by her loved ones and destroying evidence? No, that too is a Hathras hallmark. In those cases, did the government besiege the victim’s family and the Dalit hamlet, preventing them from speaking to reporters and others? Prevented anti-rape protests but allowed and encouraged violent masculine displays of Thakur caste supremacy in defence of the rape accused? No, that too is a Hathras hallmark. Did the ruling party, in those cases, use taxpayers’ money to engage a PR company to brand the victim a liar and deny the rape and attempted murder by four Thakur youths?

The outrage over Hathras is against the brutal rape and killing, and over the crimes committed by the state government to cover up the very fact of the alleged caste-supremacist rape committed by Thakur men. The outrage is at UP having a chief minister who has made no secret of the fact that he endorses the Manusmriti’s decrees of the subordination and subjugation of women and Dalits.

In 2012, feminist and anti-caste activists protesting rape would not generally face charges of sedition and Unlawful Activities (Prevention) Act (unless of course they worked in conflict areas, which previous governments too treated as exempt from constitutional protections). But now, we are up against a system that is bent on defending organised caste supremacy and Islamophobic terrorism while treating feminist, anti-caste and equal-citizenship activism as a crime equivalent to terrorism. We have seen this in Bhima Koregaon. We are seeing it in the Delhi Police ‘riots probe’ where equal-citizenship activists including Pinjra Tod feminists have been jailed under the UAPA.

And now, the Hathras police has filed FIRs accusing anti-rape and anti-caste protesters of being part of an ‘international plot’ to foment caste riots and defame the UP chief minister. They have arrested a journalist and three student activists who were visiting Hathras, and charged them with the draconian UAPA.

We often witness the phenomenon of victim blaming in rape cases: where the victim rather than the perpetrator is held guilty for the crime. Under the BJP, victim-blaming has become the template for responding to every instance of caste-based, communal or patriarchal crimes. In Bhima Koregaon, the Sanghi groups that attacked Dalits go scot-free while Dalit and human rights activists are in jail under UAPA. Likewise in the Delhi violence, the Muslim victims are arrested and charged with UAPA while the BJP leaders who openly instigated and led violence are free. And now in Hathras, too, the Dalit victim is being branded a liar, her family members are being blamed for her death, anti-rape, anti-caste protestors are being accused of “conspiracy” to instigate caste violence; while the perpetrators of the caste violence against a Dalit woman are allowed to openly display caste supremacy and threaten local Dalits.

The ongoing movement demands justice and change — not revenge. And it is clear that Yogi Adityanath, in the seat of UP CM, is actively promoting injustice and a regressive Manuvad as state policy. This is why sacking him is the first condition for creating the possibility of justice and change. 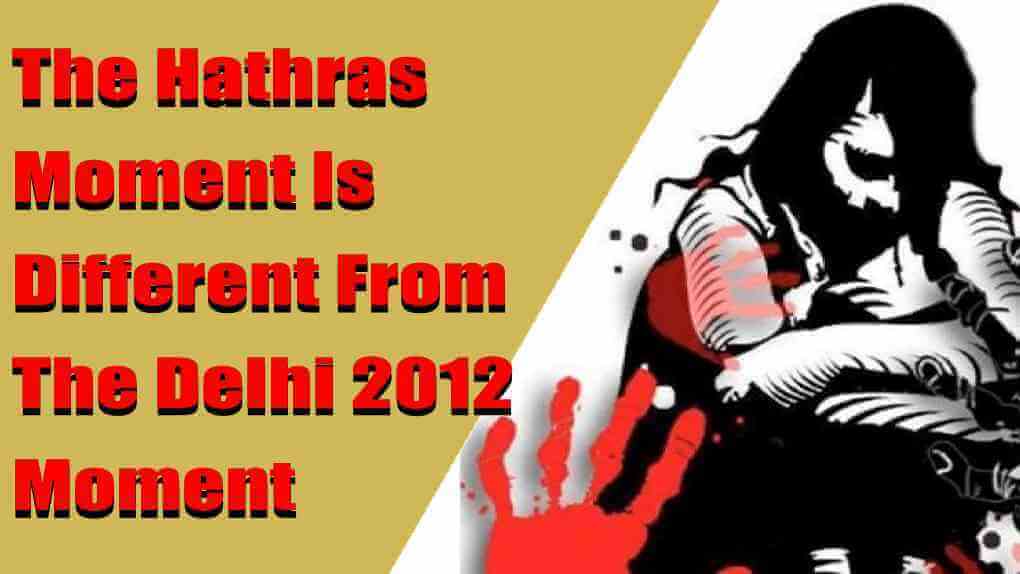