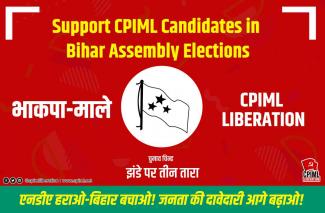 THE Bihar Assembly Elections have been announced. Bihar’s voters are waiting eagerly to vote for the change and democratic transformation that the state so urgently needs. The people of Bihar await a chance to teach the JDU and BJP a lesson for the shameful hijacking of the resounding anti-BJP mandate of 2015 and the insult to Bihar’s voters; for the hollow and false promises of “sushasan” (good governance); for the cruelty unleashed against Bihar’s migrant labourers during the lockdown; for the manner in which Bihar’s youth have been robbed of education and employment; for the violence unleashed against women and the exploitation of women scheme workers’ labour; and for the attempts to vitiate Bihar’s social and political climate with communal and feudal hatred and violence.

The CPIML is contesting 19 seats in conjunction with a broader opposition alliance. These seats are all areas where the CPIML has a long and celebrated legacy of struggles of the landless poor and oppressed communities: to exercise their right to vote, for wages, land and dignity. These struggles were waged and won in the teeth of violent feudal reaction, changing Bihar’s social and political landscape for ever. Today, CPIML is also at the forefront of struggles of scheme workers (women ASHA, anganwadi workers and midday meal cooks, contract teachers, sanitation workers); struggles for well equipped and dedicated government schools, higher education and public healthcare; and the urgent demand for dignified and stable employment within Bihar itself. The pandemic and lockdown again showed CPIML to be the most reliable and consistent source of succour for migrant workers from Bihar, spread all over India and even abroad.

The CPIML is known for its movements asserting of women’s freedom and rights. Our MLAs and activists are distinguished by their track record of boldly standing up as a bulwark against all kinds of communal targeting and violence in Bihar, including movements for justice against the witch-hunt of Muslims through fabricated charges in the name of anti-terror probes.

Our candidates are all activists and organisers of the above-mentioned struggles. The CPIML has always been truly “crowd” funded: funded by the people not the corporations. We are up against candidates that are backed by bagfuls of dirty money funnelled through the dubious Electoral Bonds scheme. You know that CPIML MLAs have always been and will always be the most consistent in asserting people’s rights and resisting communal politics and manipulations inside and outside the Assembly. A strong contingent of CPIML MLAs in the Bihar Assembly is needed now more than ever before.

We appeal to you to donate as generously as you can to the CPIML election campaign.

The Bank/payment details are:

Or E-mail us at contribution@cpiml.org

In hope of your solidarity,