THE CALL OF THE WORKING CLASS OF THE COUNTRY! GEAR UP TOWARDS 26 NOV ALL INDIA STRIKE 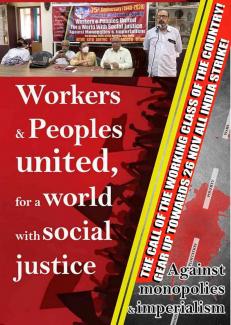 The Modi led BJP government has declared a veritable war on the working class. The first round of the battle of complete scrapping of labour laws and declarations of privatisation are over in Parliament. Now, the battlefield has shifted on to the streets and to the states. 26 Nov all India strike called by the platform of central trade unions in the country is only a beginning of a long-drawn battle against the corporate fascists in power.

The country and its history are pushed back by 100 years. Indian people and the working class shed their blood to enact the labour laws that were just scrapped and pro-corporate, pro-bourgeoisie codes enacted by the Modi led BJP government in power, in the monsoon session of Parliament, to facilitate brutal, inhuman exploitation by the capital.

They are not labour law amendments any more but a complete reversal and scripting a modern slavery. They can only be called as “corporate bourgeoisie laws” to deny workers their hard-earned rights, wages, service conditions and benefits. “Turning crisis into an opportunity” is the catch-word for Modi and RSS. Now, the opportunity of Corona is fully exploited to enact jungle laws in the Parliament. Labour laws are not meant to protect labour from rogue capital and exploitation but to facilitate rampant exploitation by removing all protections. The most significant component of democracy is the rule of law. The same is being transformed into the rule of corporates and to facilitate super profit. Profit through production and competition is being converted into profit through intense exploitation and denial of rights and wages.

The Wage Code has already made minimum wages a non-mandatory category by introducing the concept of floor wages. While the penal clauses for violation of payment of wages are removed to support capital and also by renaming Inspectors into facilitators, the penal clauses are introduced to punish union leaders.

The Industrial Relations Code has effectively snatched away the right to strike. Strike notice of 60 days is made mandatory for all categories of establishments and is made illegal during pendency of dispute and also to some period after its conclusion. Penal clause of fine upto 50,000 or imprisonment is also introduced for workers participating in a peaceful strike. The trade unions are also allowed to be punished upto cancellation of registration. The right to collective bargaining is made a mirage. Right to organise and forming trade unions also remain only on paper and are made most cumbersome with several riders.

FTE – Another Name for Hire and Fire

By allowing irregular workers in the name of ‘Fixed Term Employment”, the concept of regularisation and permanency is done away with and the system of ‘Hire and Fire’ is institutionalised and legalised. Labour relations are made anarchic by legalising individual contract with individual workers rather than streamlining the same through collective bargaining and collective agreements arrived at via trilateral mechanism involving labour officials of the government. The definition of industry has excluded many industries that were covered earlier and the threshold limit of 300 for applicability of laws regarding retrenchment, closure, lay-off, etc has excluded vast majority of labour force from any coverage or protection.

Occupational Safety, Health and Working Conditions Code – Factories Act – Increases threshold from 10 to 20 (with power) and 20 to 40 (without power). Layoff, Retrenchment, closure, etc., are made easy and no need to seek permission if less than 300 are employed.

The contract workers are covered only if more than 50 workers are recruited under a single contractor and blanket licences are issued to recruit contract worker for all type of categories and for endless tenure are issued. Equal wages and service conditions and other mandatory benefits are done away with. The worse still is that sanitation workers, security workers, scheme workers, etc., are categorised as non-core areas and are denied consequential benefits. The long-drawn battle of trade union movement for social security and regularisation for a vast section of workers are flatly denied. The concept of ‘principal employer’ and ‘employer’ are made ambiguous and principal employers are relieved of their responsibilities towards contract workers. Contractors are given a free hand to act according to their whims and fancies. Migrant labour are left in the lurch and even the minimum legal protections are given a go by.

Social Security: The Responsibility of Workers

The Code on Social Security has dealt a body blow to the concept of the responsibility of the employer to take care of the welfare of one’s own employees. Increase in threshold limit has also excluded a vast majority of workers from the ambit of coverage. The tall talks of expansion of coverage to unorganised workers is nothing but a Goebbelsian propaganda. Now, the responsibility social security, including ESI, PF, gratuity, etc., are nothing but the responsibility of workers themselves. Neither the employer nor the government are held accountable. Even the proposed pension scheme is worse than the NPS the trade union movement has been opposing. Old pension scheme is not applicable for anyone. Pension, its quantum, applicability, etc., are all dependent on the amount you are willing to part with for the purpose. Here too, the government and the employer are relieved off of their responsibility.

No Safety and Security for Women Workers

Women workers are allowed to work in hazardous industries without any safety and their security and welfare are thrown to the winds. Even maternity benefit is being snatched in the name of guaranteeing it. Women workers are facing the risk of retrenchment in the event of pregnancy and child birth. Vast majority of women workers are being denied the status of ‘workers’ even leave alone their wages and benefits. The present changes can only result in more and more informalisation of women workforce and is also dangerous enough to push them into four walls.

Its not about ‘Minimum government and Maximum governance’ but about ‘No Government and Only Corporates’. The Modi led BJP government has become a government of corporates, for the corporates and by the corporates. The entire wealth of the country, wealth of the people is being handed over on a platter to corporates. Ambanis are earning 90 crores per hour. The working class is losing every penny. Soon, we are going to witness Ambani trains running on Adani tracks. The passenger are to alight at Tata stations. The poor in the country are being denied affordable rail transport. Bank, insurance, oil, all modes of travel, coal, steel, space, land water, ecology everything is being sold out. Only left out is the breeze and air which is systematically being polluted.

DA is frozen. Wage cut and retrenchment has become the norm. Old pension schemes are scrapped ruthlessly. Employees are forced to sent home prematurely. Permanent workers are forced to compete with contract and irregular workers for wages and service conditions. Bondage, servitude and modern slavery has become the ‘new normal’. 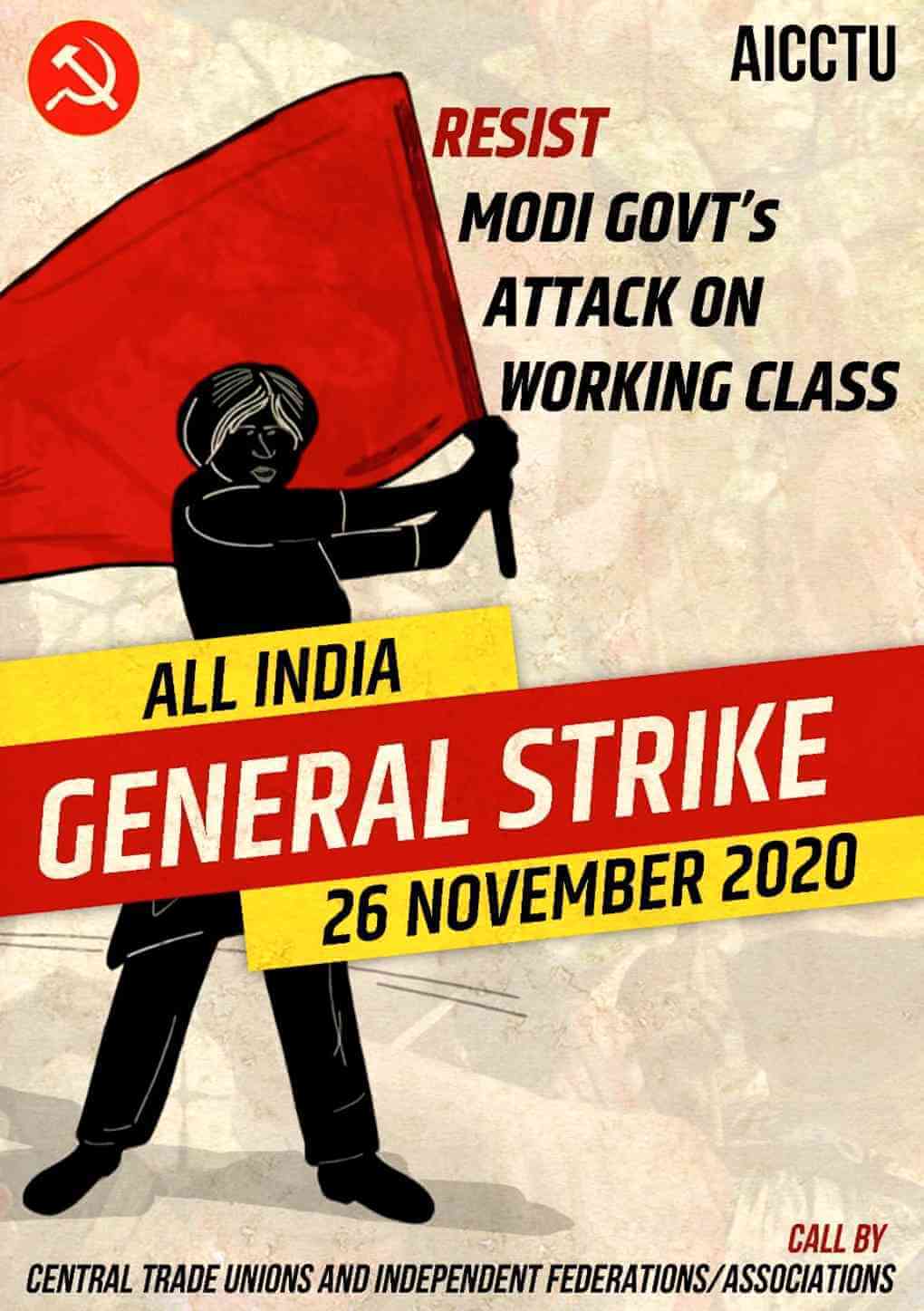 The Supreme Court judgement in a case against the Gujarat ordinances was welcome because it pin points the violation of fundamental rights of workers. Provides scope for challenging the anti-workers, pro-corporate codes too. But, it can only be short-lived because new Codes may be enforced by April next year.

Another effective model we witnessed was that the Karnataka ordinance against workers, passed by legislative assembly, was defeated by the opposition parties dominated legislative council, the upper house. The third possibility of opposition state governments denying implementation of code or tinkering with rules still remain a possibility as the labour is in concurrent list but its veracity is yet to be seen. Now, the contours of the movement are being redefined and are being effectively shifted to the states. The working class in the country has a greater role to throw the codes into the dustbin and rise up against the brutal corporate attack by the capitalist class and its agents of RSS and BJP in power at the centre.

Farm Bills have pushed farmers of the country to the margins and is a clear-cut ploy to corporatise agriculture. Farmers are being denied MSP and are thrown at the mercy of corporates and agri-corporate cartels. Disadvantaged farmers are forced to resort to distress sale because of the new farm acts. The situation in the country is conducive for a worker – peasant unity to fight the Modi government at the centre. AICCTU whole-heartedly supports the 26-27 Nov Delhi Chalo call of farmers of the country.

Stall the Wheels of the Country on 26 Nov.

AICCTU calls upon the working class in the country to make 26 Nov strike a grand success, which is only a prelude to the impending waves and waves of long battles. AICCTU also calls upon all opposition parties to support the strike and make it a Bharat Bandh on 26 Nov against the corporate agents of Modi led BJP and RSS. The corporates and its political agents have scrapped all labour laws and declared a war. It is now for the working class of the country to rise up to the occasion to counter the capitalist war comprehensively and in all its dimensions. This war can only end by scrapping the anti-worker codes and fighting back other attacks including the shameless sell out of country’s assets. Let’s stall the wheels of the country on 26th November.