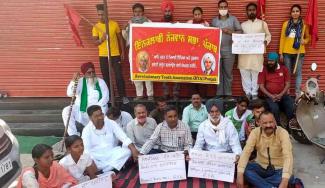 Farmers and farm workers on 25 September rose up in rage and gave the clarion call for a countrywide struggle against the three anti-farm Bills passed forcibly and treacherously without vote, making farming and the right to food slaves to corporate and multinational companies. More than 2 crore people participated in the Bharatg Bandh protests at the call from farmers’ organizations across the country including Punjab, Haryana, Western Uttar Pradesh, Tamil Nadu, Karnataka, Telengana and Madhya Pradesh. The bandh was actively supported by labor organizations, students, youth, women, poets, writers, artists and political parties.

All India Kisan Mahasabha (AIKM) conveyed revolutionary greetings and congratulations to farmers of the country for the unprecedented and resounding success of the Bharat Bandh and thanked civil society for their support. AIKM reiterated that the people of the country will never allow farmers and farming to be enslaved and handed over to corporate and multinational companies. Farmers in Punjab and Haryana have started the boycott of BJP and its allies who forcibly passed these anti-farmer Bills without vote. This boycott will spread to all other parts of the country also.

All India Kisan Sangharsh Coordination Committee (AIKSCC) had called for a countrywide protest on 28 September (Bhagat Singh Jayanti) against the three anti-farm Bills and other anti-farmer measures like petrol-diesel price hike and Electricity Bill 2020. Bhagat Singh had said replacing White Sahebs with Brown Sahebs would change nothing. BJP-RSS is acting like Brown Sahebs. They are allowing private Mandis to operate which will eventually have a monopoly over crop procurement and will procure at a very low price. All governmental procurement, storage and distribution will be ended. The Modi government is cheating farmers by calling the Mandi Bill ‘price assurance’ and the contract farming Bill ‘income assurance’. In the end farmers will become slaves and their lands will go to the hands of usurers.

AIKSCC said that the Right to Food has also been attacked through these Bills. Food grasins, pulses, oil crops, potatoes and onions have been removed from the list of essential goods. In truth this is an Act to give free license to black-marketing and 75 crore ration-beneficiaries will be forced to buy food grains from the open market.

The greatest effect of the Bandh was seen in Punjab where 31 farmers’ organizations came together to make it a resounding success. Their Rail Roko agitation began on 28 September and went on till 20 October after it succeeded in getting a law passed by the the Punjab Asssembly countervailing the three anti-farmer laws. The farmers received unequivocal support from all sections of society. People arranged langars at various places for the farmers. Many trains were cancelled and the chakka jam was a huge success. The bandh was particularly successful in Mansa where AIKM National President Ruldu Singh said that farmers would give the Modi government a befitting reply to this attack on them. The rally at Bhikhi was addressed by Punjab Kisan Union State Secretary Gurnam Singh.

On 11 October protest was dedicated to the 10th martyrdom day of young kisan leader Prithipal Singh Chakk Alisher who gave his life for farmers’ struggles. He was martyred on 11 October 2010 when he was killed by usurers, moneylenders and their goons during his struggle to save the land (about 1 ½ acres) belonging to a poor farmer Bhola Singh (Hiro ke Kalan village) from being auctioned off.

Farmers and shopkeepers in Punjab, including Punjab Kisan Union and Traders’ Association of Mansa are also holding sit-ins and blockades at Reliance petrol pumps, retail stores and Easy Day chains.

The Bandh received resounding success in Haryana and Rajasthan. Protests, road jams, effigy burnings and other programs were also held at various Districts in Tamil Nadu including Salem, Shivagangai, Dindigul, Kalladaikuruchi, Thiruvannamalai, Thenkasi, Mayiladudurai, Thanjavur, Cuddalore, Madurai, Dharmapuri, Karur, Truchy and Pudukottai . Farmers’ organizations associated with AIKSCC participated in the Bandh in Karnataka at various places including Bengaluru, Bellary and Koppal. AICCTU, AIARLA and AIKSCC played an important role in the success of the Bandh in Karnataka.

Protests were also held and Bandh was observed in various other States including Andhra Pradesh, Odisha, Maharashtra, Delhi, Tripura and Assam. 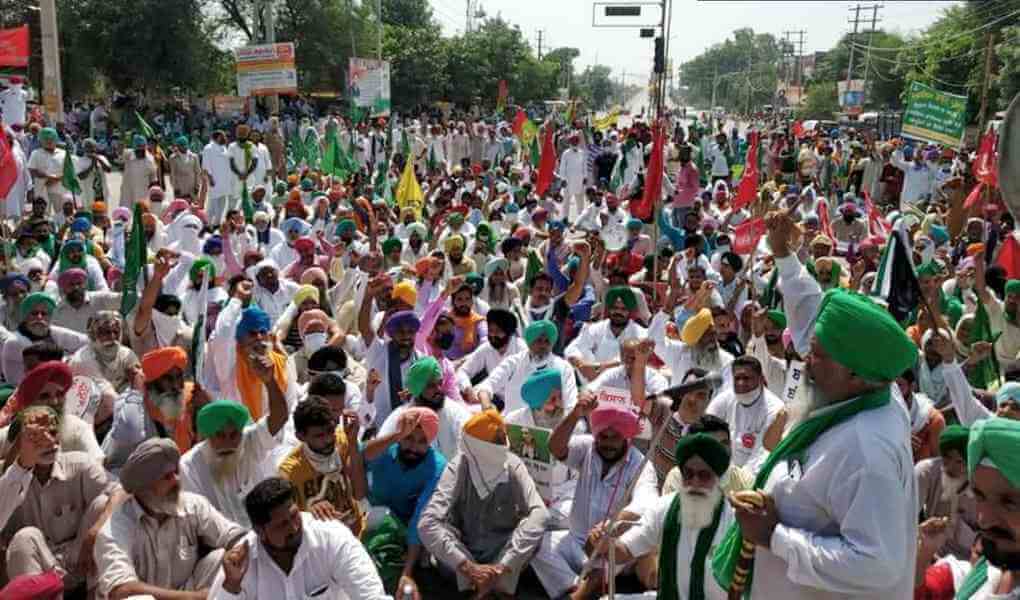