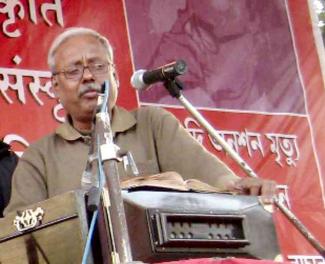 Noted cultural activist of the Pashchimbanga Gana Sangskriti Parishad, Prabir Bal passed away on 2 October. He had been a people’s movement singer, song writer and composer since the early 1970s. He formed the Poober Awaz team, and issued a cassette ‘Ami Manush’ in 1995. Jan Sanskriti Manch and CPIML activists in Kolkata paid him tributes in a condolence meeting held in his memory.