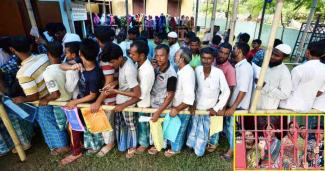 On October 12, 2020 Musa Mondal of Barpeta, Assam, hanged himself on being declared a foreigner by the Foreigners Tribunal. Mondal hailed from Kayastha Para village that falls under the jurisdiction of the Sorbhog police station in Barpeta district. He became the 107th person to lose his life over the citizenship crisis created by the NRC listing process in Assam.

A report in Sabrang (run by Citizens for Justice and Peace), noted that in 2018, “Musa received a foreigner’s notice from the 8th Foreigners’ Tribunal (FT) in Barpeta. After this he approached a lawyer and paid her a huge sum of money to fight his case. It was difficult for the unlettered man to organise the funds as he is the only earning member in his impoverished family of four. However, shortly afterwards, his lawyer met with an accident and had to be hospitalised. After 10 days in a coma, she was bed ridden for about 9 months. As she couldn’t appear before the FT during this period, Musa Mondal was declared foreigner by ex-parte judgment.

“Musa Mondal, who was living on a small piece of government land in Kayastha para, along the banks of Naljhora river, which flows into India from Bhutan, lost his mental balance as the Advocate informed him that he needed to pay a further Rs 80,000 to knock the doors of Gauhati High Court to challenge the order of the FT. He was quite upset about the development and was trying to gather money for filing a petition, challenging the order of the Foreigners' Tribunal and proving himself to be Indian. For the last one and half years, he tried to gather some money but failed.

“After a point he could not deal with his distress any more. On October 11, 2020 he left his home and became untraceable. He returned briefly, but left again. Sometime later, he was discovered hanging nearby.”

As this NRC horror story continues to unfold, the NRC authority in Assam is adding a fresh injustice and arbitrariness. In a directive to 33 deputy commissioners and District Registrar of Citizen Registration (DRCR), NRC state coordinator Hitesh Dev Sharma called on them to submit a list of 'ineligible persons' accompanied with reasons to remove their names from the updated NRC that is yet to be notified by the Registrar General of India.

'Ineligible persons' are those who are declared foreigners (DF), doubtful voters (DV) and individuals who have cases still pending in front of Foreigners Tribunals (PFT) and their respective descendants. Foreign Tribunals are quasi-judicial bodies set up to opine over whether an individual is considered an “illegal foreigner” under The Foreigners Act, 1946. They issue notices to suspected individuals or those persons who have been marked 'D' (Doubtful) voters by the local election office.

This order means that the NRC list declared by the Supreme Court is by no means the last word. The Assam authorities and BJP Government will continue to keep those on the list, and those off the list, in a powerless and helpless state. These developments only prove how the NRC list exercise pioneered and monitored by the Supreme Court was a doomed exercise from start to finish: it was a misguided delusion that the NRC process could bring closure to Assam’s people and lay to rest the doubts about who is a citizen and who is not. The fact is that the doubts over citizenship are born of prejudices – and the NRC process has only fed those prejudices and brought them alive. It has opened rather than closed a Pandora’s box.