Sifting Evidence: A Review Of “Delhi Riots 2020: The Untold Story” 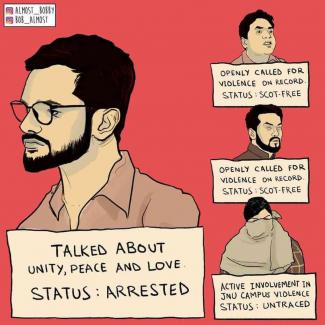 This review of the book Bloomsbury withdrew after an outcry, has been prepared by a  voluntary  citizens’  collective of academics and activists, anchored by Karwan-e-Mohabbat, Anhad and Muslim Women’s Forum. We publish excerpts from the introduction to the detailed review.

On March 11th, 2020, a group called GIA (Group of Intellectuals and Academicians) submitted a fact-finding report on the Delhi riots to the Home Ministry. The group then announced that a book Delhi Riots 2020: The Untold Story, based on this report would be launched on August 22, 2020. The guests of honour at the launch event included Kapil Mishra, a Delhi BJP leader, who became known for his hate speeches between December 2019 and February 2020, in the run up to the Delhi Assembly election. On December 21st, 2019 he led his supporters in chanting - ‘Desh ke ghaddaron ko. Goli maaro saalon ko’ (The traitors to the nation. Shoot the bastards). On February 23, 2020, he stood in North East Delhi, along with the Deputy Commissioner of Police, and threatened that his supporters would ‘take matters into their own hands’ if the CAA protesters were not cleared up. This speech is widely alleged to have triggered the subsequent violence that wracked North East Delhi between 23 and 26 February 2020. Petitions are pending in the courts asking for FIRs and legal action against him for inciting the Delhi violence, which took 53 lives (40 Muslims and 13 Hindus) and devastated many more.

On the day of the book launch, Bloomsbury India, the publisher, pulled out. We do not know exactly why, but presumably because many people objected to the idea of such a book and its release by Kapil Mishra. The authors subsequently claimed that their freedom of expression was being curtailed. It is noteworthy here that the lead author, advocate Monika Arora, was instrumental in getting noted Sanskritist Wendy Donniger’s book, The Hindus, banned in India in 2014. One of the other authors, Prerna Malhotra, belongs to the National Democratic Teachers Front (NDTF) which has frequently lobbied to remove material from the social science syllabi of Delhi University, including well known linguist AK Ramanujan’s Three Hundred Ramayanas.

But the facts on this matter are clear - there was no call to ban the Delhi Riots 2020 book. Established and reputable publishers get their reputation because they fact-check, and stay away from publishing material that may amount to libel. Other publishers may not care, and therefore do not achieve that reputation. One publisher, Garuda Press, has now said it intends to publish this book.

In the meantime, a PDF of the Bloomsbury book began to be circulated widely, on WhatsApp, Twitter and email, by supporters of the book, who believed that its message must be spread far and wide. At the virtual book launch, Kapil Mishra tweeted “The book is public now”. During a programme on NDTV telecast on 26 August 2020, one of the authors questioned the anchor’s authority asking if he had read the book, and said that reports critical of the book were coming from ‘fake portals.’ We conclude that the authors wanted people to have an informed opinion based on their close reading of the book.

What we found is contained in the pages that follow - passages from the book with false claims, factual inaccuracies, and distorted/selective presentations. As reviewers, we have simply used the yardstick of evidence and fact and lack thereof. There are many statements in this book that amount to libel.

A reputed publisher like Bloomsbury must answer how this material, including defamatory content, made it through their fact-checks from manuscript stage to final proofs.

WHAT IS THIS BOOK ABOUT?
Rewriting the narrative

This book is not about the Delhi riots. This book is about re-casting a people’s movement for equal citizenship and against the Citizenship Amendment Act, 2019 (CAA), into something criminal. In the book the ‘facts’ of the Delhi violence form only one chapter (chapter 6).

The passing of the CAA led to one of the largest democratic rights movements in independent India, across class, religious communities and regions. Its closest contemporary equivalent is probably the Black Lives Matter (BLM) movement. Like the BLM, the movement against the CAA, with full participation of democratic and civil rights actors, was led by those most directly affected, by Muslims, and especially by Muslim women. Scores of university students, women and men, also played a leadership role. The police attack on the students of Jamia Millia Islamia (JMI) who were peacefully protesting against the CAA and the police vandalisation of the Jamia library had led to a wave of sympathetic protests in colleges and universities across the country, starting with Aligarh Muslim University (AMU).

In order to delegitimise the movement against the CAA, it had to be criminalised. The Delhi riots themselves were the first step – to introduce violence and abruptly end a peaceful people’s movement. The second step was to link this violence to the movement against CAA, as cause and effect. The third step was to link all Muslim protestors, those associated with civil rights and democratic movements, and ordinary university students critical of government policies, and paint them all as actors in a synchronized conspiracy to destabilise the country.

According to this book: There was a giant criminal conspiracy to create extreme violence and destroy the Indian state. The conspiracy was likely foreign funded, probably by international, Islamist organizations; possibly the ISIS. The entire movement against the CAA-NRC-NPR in India was the front. The lakhs of protestors, including youth, students and women of all ages were part of the conspiracy; sometimes described as gullible and brain- washed, and other times as co-conspirators who were exceptionally violent. The conspirators were ‘Urban Naxals’ or Jihadi, and most times both at once. The book does not explain why Naxals were funded by Islamists, despite their known differences.

The phrase Urban-Naxal-Jihadi is used a lot in this book. Each throw aims to stick to a range of actors, in the belief that stickability is a foregone conclusion; that it is self-evident and self-explanatory; and requires neither logic nor evidence.

It is fair to say that in this book, all people who express liberal views and take public positions against the ruling BJP are Urban-Naxal. All Muslims - men, women and children - are Jihadi. The tale takes a broad sweep, invokes images of ISIS, Syria and Egypt, and quotes from purported Maoist pamphlets about guerrilla warfare.

According to this book, conspirators – interchangeably Urban, Naxal and Jihadi - planted highly skilled sharp-shooters, possibly trained in Syria or Egypt, on high rise buildings in North East Delhi to kill. Therefore, the authors demand that all high-rise buildings in all of Northeast Delhi must be subjected to a forensic audit. Many Islamic rioters, the book suggests, had combat training and used ‘bunkers.’ The conspirators also trained women to hide swords under their burqas. However, it does not indicate a possible location for this burqa/sword training. Delhi Police had no choice but to crush this Islamist-Naxal conspiracy, which is also taking root in our most reputed universities. Therefore, this books also calls on “... vice chancellors of DU, JMI, JNU and all other universities to take an audit of the use of their campuses to engineer wider disturbances in the city in the eight weeks leading up to the riots.” This then, is the big picture of the Delhi riots in this book.

This narrative may not meet many readers’ standards of credibility, but it claims to be the ‘untold story’ of the Delhi riots.

We did, however, find evidence, which forces us to take this book very seriously. For alongside this book, we also read the charge-sheets being filed by the Delhi Police in the riot cases (refer – Introduction II) We came to the inescapable conclusion that there is indeed a conspiracy. And this book is part of it.

The theories in this book have been replicated down to details in the charge-sheets being filed by the Delhi Police in the Delhi riots cases. These criminal cases have already incarcerated scores of people who participated in the movement against the CAA. For example, Chapter 6 about the first day of violence in the Seelampur-Jaffrabad area, contains a story that mirrors the version in the police charge-sheet on the Jaffrabad violence (FIR 50/20). We scanned several other charge-sheets and found the same story being repeated. Each charge-sheet begins its narrative with the movement against the CAA, it then goes on to talk about conspiracy, pre-planning, networks, and so on, with no evidence whatsoever. Yet, people are in jail today, many under the Unlawful Activities Prevention Act (UAPA), an anti-terror law that makes bail near impossible. Many more live with the threat of imprisonment tomorrow.

This book is part of a carefully crafted template for the police to follow and embellish. Unrelated actors and actions are now being woven by the police into a complex conspiratorial web out of thin air. The grand foundational idea of the rule of law and sanctity of investigative procedures, on which hinges the liberty of each individual in any civilized society, is reduced to tawdry copy-paste.