A 48 hours hunger strike by CPIML Delhi State Secretary and other comrades against the order to demolish slums near railway tracks, culminated in the release of Charter for Slum Dwellers in Delhi.

The Supreme Court order came after the Railway Ministry submitted to the court blaming the lack of cleanliness on the Jhuggis along Railway tracks in Delhi. Nothing can be more shameful than the fact that an elected government is blaming the poor for pollution that has been created by its own policies. Since the order of demolition was issued, the Railways have been putting up eviction notices in different slums.

The CPIML held a 48 Hours Warning Hunger strike in the Wazirpur Slum, one of the slums which is threatened with demolition, and protest meetings in other slums including the Mansarovar slum.

Voices of protests erupted from different slums. Slum dwellers declared that they would not tolerate any attempt to evict them from their Jhuggis. Due to the popular opposition from Jhuggi dwellers against the eviction order, the Central Government responded to a petition filed by Congress leader Ajay Maken in court, stating that that no demolition will happen in the next four weeks.

The four weeks moratorium on slum demolition is only an eye wash. The hunger strike demanded a complete revocation of the demolition order.

While starting the hunger strike Ravi Rai said "The slum dwellers have right to housing near place of their present Residence. The Government's so called assurance of no demolition till 4 Weeks is an eye wash. We demand complete revocation of the demolition order and housing for all slum dwellers near place of present residence along with land title".

Shakuntala Devi, another hunger striker who is staying in the Wazirpur Slum for last 28 years said, "We have been staying here for a long time now. We work in the city. The government should tell us where will we stay if our house is demolished."

Sita Devi, another hunger striker who is staying in the Jhuggie for last 22 years said, "We have not been given a pucca house till now by the government and now they are trying to demolish our Jhuggi. Will they give us house in next four weeks that they have not given in last 22 years?".

The hunger strikers demanded:
• Permanently revoke the order of demolition.
• Ensure proper house within 5kms of the present residence.
• Ensure land title to all. 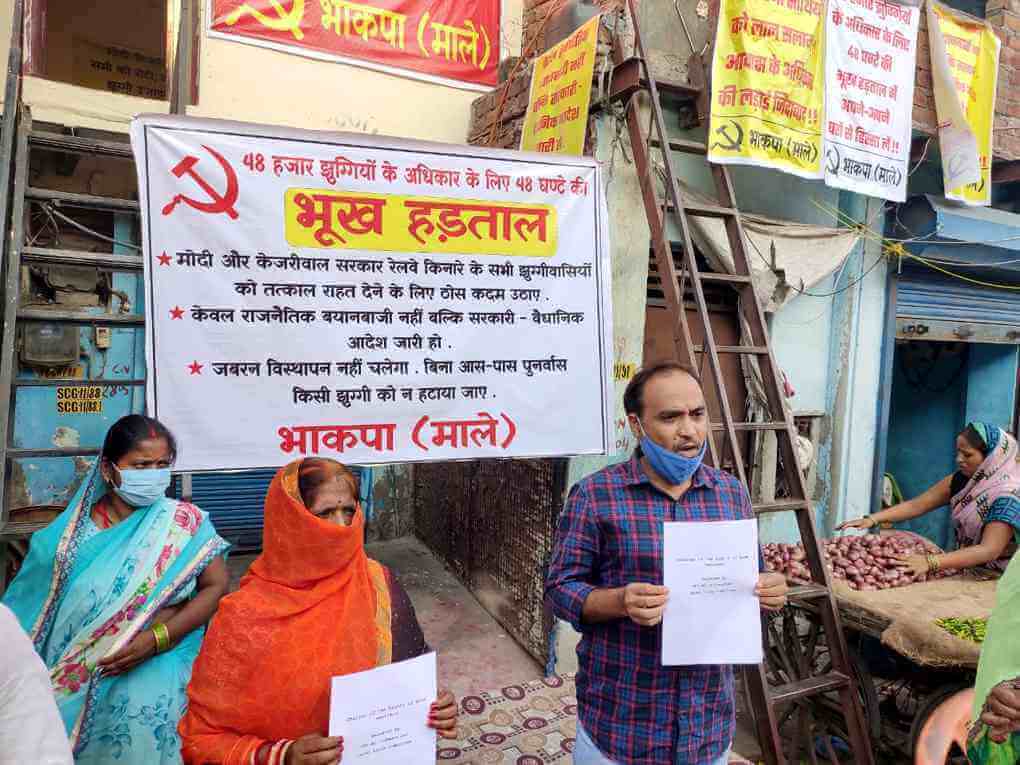