DUET: A Proposal For An Urban Work Programme

(We reproduce a proposal by economist Jean Drèze for a scheme of subsidised public employment in urban areas, to address the current job crisis, and to create a lasting institution as an antidote to urban unemployment and urban decay. This proposal was first shared on ‘Ideas for India’. As Ideas for India points out, “Please note that the motivation for DUET is quite different from that for MNREGA. MNREGA offers insurance to rural workers in a slack season or in a drought year when agricultural jobs disappear. That is not the case of urban production. Yet, there is significant unemployment in urban areas. Urban areas could use some infrastructure and there is under utilised labour but there are no resources to use this labour to build the infrastructure. DUET may be one way to solve this problem?”)

There is a crisis of employment in the urban informal sector, as millions of workers have lost their job due to periodic lockdowns, and may or may not retrieve it soon.

As public institutions reopen after months of lockdown, much work will be needed to restore the premises (cleaning, sanitising, white-washing, weeding, repairing, painting, plumbing, and so on).

Each job stamp can be converted into one person-day of work within a specified period, with the approved institution arranging the work and the government paying the wages (statutory minimum) directly to the worker’s account on presentation of job stamps with a due-form work certificate from the employer.

Employees are to be selected from a pool of registered workers by the approved employer, or, better perhaps (to avoid collusion), by an independent ‘placement agency’ – see below.

To avoid abuse, the use of job stamps could be restricted to a list of permissible works. But the list should be fairly comprehensive, and not restricted to maintenance.1

The list of works should not be so broad as to displace existing jobs in public institutions.

All DUET employment should be subject to worker safety and welfare norms specified in the scheme and existing labour laws.

All urban residents above the age of 18 should be eligible to register under DUET, but special registration drives or placement agencies could be located in low-income neighbourhoods.

The scheme would cover both skilled and unskilled workers. Whenever a skilled worker is employed, an assistant (unskilled) worker could be mandatorily employed as well, to impart an element of training and skill formation to the scheme. Further training facilities could be developed or explored over time, for example, by some of the non-profit placement agencies if any.

Some cost-sharing could be introduced, with the approved employer paying a small portion of the wages, or paying for the job stamps instead of getting them for free. That would help to ensure that work is productive. However, it would reduce employment generation. Also, cost- sharing is a complication, perhaps best avoided initially.

An independent authority could be appointed or designated at the municipal level to monitor, inspect, audit and evaluate the works.

The National Urban Livelihood Mission (NULM) could possibly play a role in DUET as well.
DUET could easily be initiated on a trial basis in a particular district or even municipality.

The primary role of the placement agency is to assign registered workers to approved employers as and when required. But it could also serve other purposes, for example, certifying workers’ skills, protecting workers from exploitation and arranging social benefits for them.

Various options could be considered for the placement agency, such as: (1) a single agency for the municipality, run by the local government; (2) a worker cooperative; (3) multiple placement agencies, run as non-profit organisations or cooperatives.

Some countries have employment-subsidy schemes of similar inspiration, e.g. “service voucher schemes” (SVS) in several European countries. Belgium has a very popular SVS for domestic services such as cleaning and ironing. It was used by 1 out of 5 households in 2016.

It would be relatively easy to move from DUET towards demand-driven ‘employment guarantee’. That would require the municipality to act as a last-resort employer, committed to providing work to all those who are demanding work but not finding any with other approved employers. Alternatively, DUET could become part of a larger employment guarantee programme in urban areas.

(In addition to the DUET proposal above, we also reproduce excerpts from a concept note of a proposed Urban Right To Work legislation, prepared by Sajha Manch, a federation of groups in Delhi working among the urban poor. These proposals could provide structure and focus for the growing movement of Indian youth against unemployment.)

By the collecting information through surveys and organizing a series of consultations and workshops, Sajha Manch realized that the dynamic of urban livelihoods was distinctly different from the demand for guaranteed rural employment. Broadly, there were three categories of work in the city: (1) wage employment, which was largely unsafe; (2) self-employment, which was largely illegal; and (3) under-employment, which was both unsafe as well as illegal. These studies revealed three key demands of the workers: (1) the right to legal identity, (2) access to space and resources, and (3) credit on easy terms.

On the basis of these studies a tentative Urban Right to Work legislation has been drafted. This draft was debated with informal labor organizations, national trade unions, and civil society organizations in four seminars which made important suggestions. But the draft requires extensive national debate so that various labor movements can develop a common understating and it could become more comprehensive and effective from the worker’s point of view. It will also require a comprehensive campaign within all sections of society to enact such legislation.

The following are the main points of the draft:

To ensure the livelihood of workers in urban areas, the first demand is that the every adult who register for any production work should get 300 days work in a year.

Everyone must get a living wage instead of minimum wage, as decided in the 15th Indian Labour Conference, 1957 and affirmed by the Supreme Court of India.

For salaried workers with employers the demand for a Tripartite Board is tenable, but for the self-employed, and the unemployed, the government should be the principal employer.

This means that if any category of urban worker – salaried, self-employed, or unemployed – is not getting a living wage then the government (Labor Department) has to compensate.

Instead of making separate Boards for different occupations, this draft proposes that the Labor Department should take full responsibility for all, in order that workers remain united.

Thus Right to Work is considered to be a fundamental right, and not an employment guarantee scheme that is dependent on government’s discretion and people’s compulsion.

Workers’ accommodation near work should be an essential requirement so that a large share of workers’ income is not spent on transport.

Every worker, employed or seeking employment, should be entitled to registration and issuance of identity card by the Labor Department, and this should be interchangeable with the NREGA job card for ease of migrant workers.

Every job must be healthy and safe, and be available for disabled and vulnerable people, so that it protects both environment and society.

Every public works should be labor-intensive and 40% expenditure reserved for employment, while restrictions on public appointments in government departments should be removed.

Participation of workers in policy-making and the right to organize are crucial if transparency and accountability are to be demanded from government.

We appeal to all concerned for an open discussion on this draft so that a comprehensive debate can lead to a national campaign on the Right to Work, and the fragmented unorganized workers all over the country may be united to defend their rights.

PM Modi’s birthday was observed by youth all over India as “National Unemployment Day”: with reason. The country’s youth held the PM’s demonetisation, GST, and lockdown as the three death blows that felled the Indian economy, and destroyed jobs.

Urban unemployment in India was 9.83% in August (Center for Monitoring Indian Economy)

National unemployment rate was at 8.35% in August (CMIE)

6.6 million white collar professional jobs, including engineers, physicians, teachers, accountants, and analysts were lost between May and August 2020, bringing employment of this sector of professionals to the lowest level since 2016. (CMIE)

5 million industrial workers’ jobs were lost during May to August 2020, largely in the medium, small and micro industrial units. (CMIE)

India will suffer a “permanent” loss of 13-14% of real GDP (amounting to around Rs 30 lakh crore) over the medium term:  much higher than the 3% average loss that most other economies in Asia-Pacific will suffer.

India has an existing pool of 3.5 crore unemployed people. Since the pandemic hit, 2 crore salaried jobs have been lost. Migrant workers forced to return home and find survival in the agricultural sector, while counted as employed, are actually instances of disguised unemployment.

By the end of this financial year, even if no further jobs are lost, India would need close to 4.5 crore jobs. 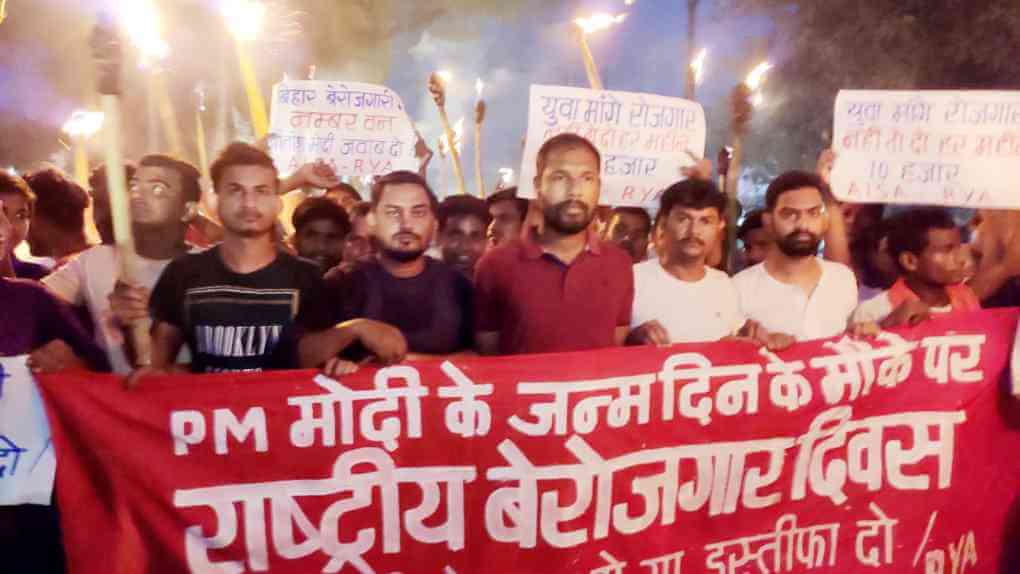