The Zig-Zag Course of Reforms and Opening Up 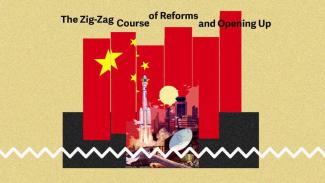 The reforms agenda got going since 1978, but it really took off in 1980–81, when two of Deng’s close comrades came to the helm -- Zhao Ziyang became Prime Minister and Hu Yaobang replaced Hua Guofeng as the Party General Secretary .

The reforms affected the whole spectrum of China’s economic, political and social fabrics, though not with equal force. The point of departure was agriculture and rural economy, which was in a very sorry state. An household-responsibility system, which divided the land of the People's Communes into private plots, was put in place. Peasants were now allowed to exercise formal control of their land as long as they sold a stipulated portion of their crops to the government. This move by itself  increased agricultural production to a great extent.

More importantly, as a well-researched paper from 2008 written by Shenggen Fan and Ashok Gulati1  points out, since agriculture provides employment to majority of the people, by making it “the starting point of market-oriented reforms,” the government was able to ensure widespread distribution of gains and build consensus and political support for the continuation of reforms. And prosperity in agriculture promoted rapid development of the rural non-farm (RNF) sector. “The rapid development of the RNF sector”, the authors observe, “also encouraged the government to expand the scope of policy changes and put pressure on the urban economy to reform as well, since non-farm enterprises in rural areas had become more competitive than the state-owned enterprises (SOEs). Reforms of the SOEs, in turn, triggered macroeconomic reforms, opening up the economy further …”

The important point to note here, according to Fan and Gulati, is that “The Chinese policymakers first created the incentives and institutions required by the market economy and then, in the mid-1980s, they began to slowly open up markets, by withdrawing central planning and reducing the scope of procurement [by the state] while expanding the role of private trade and markets…”

This particular trajectory or sequencing of the reforms was the exact opposite of what the successive governments in India have adopted, and naturally the results -- including the crucial question of popular support or opposition -- have been very different too. As the co-authors from China and India assert at the very beginning of their paper, “Despite similar trends in the growth rates, the two countries have taken different reform paths; China started off with reforms in the agriculture sector and in rural areas, while India started by liberalising and reforming the manufacturing sector. These differences have led to different growth rates and, more importantly, different rates of poverty reduction…”.

Well, so much (should we say, so little!) for agrarian/rural reforms. Among social reforms, an early and important one was the world’s largest, most rigorous and intensely debated family-planning program -- the one-child policy -- in order to check China’s burgeoning population. In urban industry, a dual-price system was introduced. State-owned industries were allowed to produce and sell above the plan quotas, and commodities were sold at both plan prices (for the quotas) and market prices (for the additional products). As a result, better capacity utilization was ensured and people who had the money could buy more than the what was allotted to them under state rationing, and that without waiting in cues.

Decentralized economic management was introduced at the micro level, with factory managers in most sectors largely freed from the control of the central government and given the authority to determine production levels and to pursue legitimate profits for their enterprises. This was combined with steps to improve the quality of centralized management of the macro-economy by roping in academically and technically proficient cadres and non-party experts. Moreover, the adoption of Industrial Responsibility System in late 1980s further promoted the development of state-owned enterprise by allowing individuals or groups to manage the enterprise by contract. Private businesses were allowed -- and encouraged -- to make profits and generate employment.

Chinese enterprises were gradually opened up to foreign investment; trade and cultural ties with the West were straightened. A series of Special Economic Zones, starting with Shenzhen (1979), were created. Relatively free from government regulations (and lacking in labour rights) the SEZs became engines of growth for the national economy. The lifting of price controls in 1985, a very important reform, was soon followed by significantly curbing protectionist policies and regulations.

In early 1990s, the Shanghai Stock Exchange, which was closed down some forty years ago, was reopened and the Shenzhen Stock Exchange was established. In 1997 and 1998, large-scale privatization took place. As in India, many workers lost their jobs. The difference was that thanks to rapid and real growth of the economy most of them, sooner rather than later, got alternative (albeit of lower quality in many cases) jobs. State monopolies in strategic sectors like petroleum and banking, were maintained, however. The financial sector also was brought under the purview of reform so as to make it more business-friendly, while much of the old social welfare schemes were drastically altered or dismantled.

In 2001, China joined the World Trade Organization. Between 2001 and 2004, the number of state-owned enterprises decreased by 48 percent. The private sector (domestic and foreign-owned taken together) grew remarkably, accounting for as much as 70 percent of China's gross domestic product by 2005.

In view of problems like increasing income inequality and excessive predominance of private capital, some recalibration was made in 2005. Hu Jintao, Party GS from 2002 to 2012, restored some of the previously slashed subsidies, enhanced state control over the healthcare sector, and put privatization on hold. The government once again started investing heavily in the state sector and promoted the emergence of large "national champions" which could compete with large foreign corporations. Many dubbed these measures as populist-nationalist. By 2010 China surpassed Japan as the world’s second largest economy.

The next GS Xi Jinping, while continuing with the old policies like further opening up, greater market-oriented decision-making and further reduction or discontinuation of support for poorly-managed state-owned enterprises, declared a new policy orientation in July 2020. Speaking to a group of public and private business leaders at the Entrepreneur Forum in Beijing, he batted for “a new development pattern, with the domestic or internal circulation as the main body and the domestic and international dual circulations mutually promoting each other." In the face of hostile trade wars launched against China by the US and its allies, this appears to be an attempt to reduce dependence on exports as a major growth engine and significantly promote the domestic market.

These apart, the current phase of reforms is characterized by some other policies, measures and campaigns - - such as sharply enhanced Party/state control over big business, the "Common Prosperity" campaign and so on, - - the implications of which are often more political than economic, and deserve to be studied as such. This, together with the major takeaways from the entire trajectory of economic reforms and political twists and turns in the post-Mao era, we shall take up in the next and concluding part of this article.

1. “The Dragon and The Elephant: Learning from agricultural and rural reforms in China and India”, The Economic and Political Weekly, 28 June 2008.