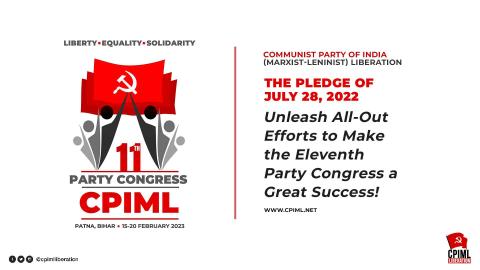 July 28, 2022 marks the fiftieth anniversary of the martyrdom of Comrade Charu Mazumdar, the great architect of the Naxalbari peasant upsurge and the founding General Secretary of the CPI(ML). It is an occasion to draw inspiration from his glorious contribution to the revolutionary communist movement in India. It is also an occasion to take the pledge to strengthen and equip his party in all respects to play its due role in today’s challenging situation.

For years Comrade Charu Mazumdar worked within the CPI and CPI(M) as a dedicated communist organiser of the peasant movement. He was one of the core organisers of the historic Tebhaga movement which united the oppressed peasantry in undivided Bengal in the late 1940s and inspired a great progressive awakening against the three key impediments of that period – landlordism, colonialism and communalism. Naxalbari was the product of years of sustained organised and conscious effort to revive the Tebhaga spirit and legacy in the situation of post-independence agrarian and economic crisis.

Comrade Charu Mazumdar was also a keen observer of the political situation, and paid adequate attention to class struggle in all its dimensions including the often neglected ideological-political aspect. When the international communist movement witnessed major debates over the issue of developing a revolutionary counter offensive against imperialism in the late 1950s, and the debate started resonating among Indian communists, Comrade Charu became a consistent advocate of the revolutionary line, joining the CPI(M) in 1964 and continuing the battle within the CPI(M). 1967 proved a new watershed when communists came to power as a major force in the first non-Congress coalition government in West Bengal and CM and his comrades took to intensifying agrarian revolutionary struggles on the ground.

Naxalbari illustrated the trajectory of one single upsurge creating a countrywide revolutionary storm and Comrade CM showed us how to seize moment. The upsurge inspired the student-youth community on an unprecedented scale, and responding to CM’s call thousands of these young activists fanned out into the countryside to get integrated with the landless poor. This gave rise to a new convergence of struggles, a new fusion of ideas and experiences. Thus was born the CPI(ML) amidst a new prairie fire of class struggle. When the new party was sought to be crushed by unleashing a massive crackdown and bloodbath, CM also responded to that most difficult situation with great courage, confidence and wisdom.

Days before his martyrdom in his final notes he called upon his comrades to keep the party alive by all means and tide over the setback by forging the closest of ties with the people, upholding the interests of the people as the only interest of the party and developing unity and cooperation with even our erstwhile adversaries and opponents within the broad left and opposition camp. His final words inspired us to reorganise the Party beginning with the Party Central Committee on the second anniversary of his martyrdom. Over these five decades we have successfully taken the Party forward overcoming phases of acute state repression, feudal and political violence, occasional political setbacks and ideological challenges.

Today, on the fiftieth anniversary of CM’s martyrdom, we find ourselves in an extraordinary situation. Not only have the lives, livelihood and liberties of the people become extremely insecure, the republic is fast being stripped of its constitutional commitment to secular democracy and trapped in the cage of a fascist Hindu Rashtra. The Party which was founded to realise the dream of revolution must now take the lead to rescue and rebuild the republic in the face of this unprecedented disaster. To enable the party to deal with these challenging circumstances we need to strengthen the party organisationally, politically and ideologically. Let us launch a dedicated campaign in this direction which will culminate in the Party’s forthcoming Eleventh Congress in Patna next February. Let every Party member, branch and committee rise to the occasion to make the Congress a great success.