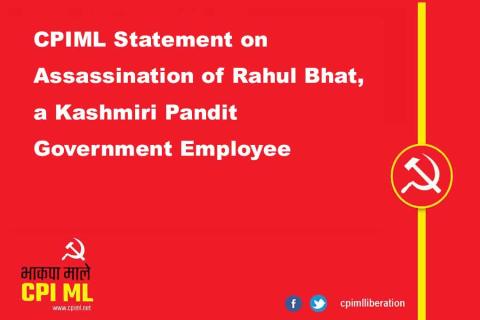 The assassination of Rahul Bhat, a Kashmiri Pandit government employee, by militants in Budgam is a shameful and cowardly act of terrorism that must be condemned in strongest of terms. It is yet another act of targeted killing to foment further division.

While the BJP and RSS hijack the pain of the Kashmiri Pandits to fan communal frenzy in the rest of India and justify genocide against Muslims, they have squarely failed to give protection and safety to either the Kashmiri pandits, or other civilians in the J&K despite having entire state machinery and security command under their direct control at every level. Their spokespersons can still be seen pointing fingers at every other opposition party except acknowledging their own accountability and failure.

A large number of Kashmiri Pandits in government jobs have tendered en masse resignation protesting against the abject failure of the BJP govt to give protection and peace. PM Modi’s claims that demonetisation and then the abrogation of Article 370 would end terrorism have proven false - and instead one witnesses a new lease of life to long-dormant militancy in the Valley.

The fact is that a large number of Kashmiri Muslims have also been victims of militant violence. Justice for Kashmiri Muslims and Kashmiri Pandits - for violence by militants as well as custodial torture and killings by armed forces of the State - cannot be pitted against each other. People of J&K and all democracy loving people in the rest of the country must stand united for peace and justice. All attempts at further communalisation and fanning hatred must be robustly defeated.