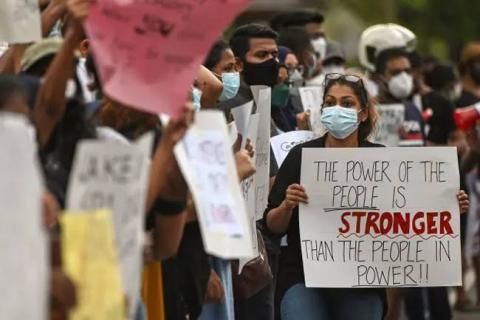 The people of Sri Lanka have risen up in sustained protests since March 2022 against the Rajapaksa regime and its misrule. The protests were sparked by economic mismanagement that resulted in soaring prices of food and fuel, fuel shortages, and indefinite power outages, with elderly people dropping dead in fuel queues.

But these protests quickly grew into an all out uprising demanding an ouster of the current government led by the Rajapaksa brothers Gotabaya and Mahinda who are President and Prime Minister respectively of the island nation. The Government’s open nepotism contributed to the people’s anger. As we write this, the Prime Minister Mahinda Rajapaksa, notorious for the genocide of the Tamils who were fighting for self-determination, has had to resign while his brother Gotabaya has declared shoot-at-sight orders to quell protests.

The Rajapaksa brothers came to power on the strength of their image of being “strong leaders” who had “conquered” the rebellious Tamils. The continued humiliation of the Tamils was then compounded by Islamophobic politics (bans on halal meat and hijabs, that the RSS and BJP are now echoing in India, as well as patronage of hatemongering Buddhist monks) and violence against both the Muslim and Christian minority populations. For Indians, what is most significant about the current uprising is the united participation of Sri Lankan citizens across ethnic and religious divides. The people of Sri Lanka have been able to see the disaster that the Rajapaksa regime has wrought on them under cover of hate-based politics.

In India, the Modi-made disaster is already underway: the soaring prices, the worst unemployment in the past half century, accompanied by a steady din of hate-speech and hateful policies by the Modi Government and BJP-led state governments are all too reminiscent of Sri Lanka. The farmers’ protests, the protests of unemployed youth in UP and Bihar – these are all signs of the churning and unrest that the BJP is not able to control with its anti-Muslim and anti-Christian violence alone.

In India, Sangh-backed hate-mongers keep threatening the genocide of Muslim minorities; and Muslims and Christians too face daily state-sponsored violence at the hands of Hindu-supremacists. Sri Lanka actually witnessed a civil war that ended with the genocide of the Tamils. Since then, Sri Lankan rulers have not only evaded all accountability for their crimes against humanity, they have tried to capitalise on that genocide to hold on to political power and popularity. And they also continued to fuel new waves of hate against other minorities – Sri Lankan Muslims and Christians, also pitting these minority communities against each other. The rhetoric of war against Tamil “separatism”, and of Sinhala-supremacist nationalism is now coming undone, revealing that the “defeat” of the oppressed inevitably brought in its wake the defeat of all. That is another lesson that Indians must take from the people of Sri Lanka.

The Sri Lankan people’s uprising, with its deep determination in the face of severe repression, is deeply inspiring to Indians. Victory to the protesting Sri Lankan people! May their example inspire India and all of South Asia to reject the politics of hate and corporate neo-liberal plunder, and assert the rights of people!