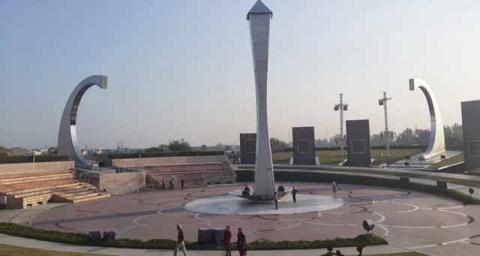 Resist Modi’s Attempts To Project Him As Anti-Muslim Icon

In a public address on the 400th birth anniversary of Sri Guru Tegh Bahadur, the ninth guru of the Sikhs on April 21, PM Narendra Modi, true to form, tried to distort his legacy to serve Islamophobia. This is part of a larger conspiracy on part of the RSS to pit the Sikh religious minority community against the Muslim one.

Guru Tegh Bahadur is known for sacrificing his life in organising resistance to the Mughal emperor Aurangzeb’s oppression of the Sikhs. Modi’s Ministry of Culture staged his speech at the Red Fort, claiming that Modi would use the occasion to convey a message of peace between religious communities. Instead, Modi implied that Tegh Bahadur defended “our faith” (i.e Sikh and Hindu faith) against Aurangzeb’s “storm of religious fanaticism.” And he further implied that Sikhs and Hindus today need to unite against “fanatic” Muslims to honour Tegh Bahadur’s legacy.

Sikh religious leaders as well as scholars of Sikh history have made it a point to challenge Modi’s poisonous narrative. The Shiromani Gurdwara Parbandhak Committee (SGPC) issued a statement pointing out that to honour Guru Tegh Bahadur’s memory, “everybody’s religious freedom” must be “established and protected.” The SGPC statement referred explicitly to the Modi regime’s persecution of religious minorities, saying, “If excesses are committed against anyone, then it would be understood that the government at Delhi is not sincere.” Akal Takth Jathedar Giani Harpreet Singh made it clear in his own address at a memorial event organised by the SGPC, that he was not referring to Sikh minorities alone. He said, “The motive of martyrdom of Sri Guru Tegh Bahadur was so that the right to practice faith and religion was given to everyone. But today in India, going against the ideology of the Guru Sahib, the religious beliefs of minorities are being suppressed.” The SGPC president Harjinder Singh Dhami was even more explicit, saying that instead of organising the Red Fort event, it would have been better if the PM had paid tribute to Tegh Bahadur’s legacy by announcing concrete steps against hate crime in the country.

Scholars of Sikh history have pointed out that “Had Guru Tegh Bahadur been alive today, he would have stood with the Muslims facing oppression in the country.” BJP regimes all over India are inflicting communal violence on Muslims but punishing Muslims for the same violence. It is Muslims who are overwhelmingly arrested by police after Hindu-supremacist processions abuse and attack Muslims. BJP governments are sending bulldozers to raze down homes, shops and mosques of Muslims in the name of punishing them for communal violence. Modi’s speech on Tegh Bahadur attempts to strengthen that same Islamophobic script: by seeking to project Tegh Bahadur’s fight as an anti-Muslim one rather than one against rulers who enforce religious fanaticism and victimise religious minorities.

The filmmaker who made ‘Kashmir Files’ to distort the pain of Kashmiri Pandits and use it to justify genocidal sentiments against Muslims, has now announced a plan to make ‘Delhi Files’ on the anti-Sikh pogrom of 1984. That pogrom was organised by Congress leaders and patronised by the then Congress Government – but it is a well-documented fact that the Hindu-supremacist RSS helped organise and perpetrate the killing of Sikhs. But today RSS propagandists are out to use the Sikh’s memory of injustice and targeted state-sponsored violence, to justify Hindu-supremacist politics.

BJP wants Sikhs to join hands with the RSS to persecute Muslims, rather than feel empathy for Muslims who have repeatedly faced communal killings just as Sikhs did in 1984.

The Sikh community both in India and internationally, has been vocal in supporting many progressive causes – such as the farmers’ struggle, as well as the issue of persecution of Muslims and Kashmiris. Punjab witnessed the largest meetings organised in protest against the abrogation of Article 370. To try and weaken the farmers’ movement, the Modi regime tried to imply that it was backed by Sikh ‘separatists and terrorists’.

Ever since 9/11, Sikhs have been mistaken for Muslims and faced hate crimes. American and Canadian Sikh individuals and organisations have refused to respond by distancing themselves from Muslims and explaining that they are not Muslims. Instead they choose to respond by explaining how Islamophobia and the scape-goating of any religious or racial minority community is wrong.

Anti-fascist Marxist poet and playwright Bertolt Brecht had observed that “The compassion of the oppressed for the oppressed is indispensable. It is the world's one hope.” Indeed today, the BJP and RSS deeply fear that ‘one hope’, and attempt to pit oppressed communities (Sikhs, Christians, Dalits, women) against Muslim minorities. But the Sikh community is teaching the world a lesson in principled solidarity and resistance – and we hope that the whole of India will learn from and emulate them.