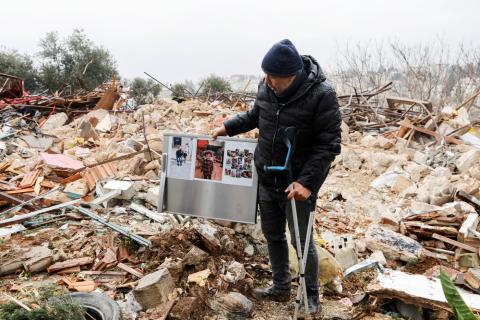 On January 19, the Israeli occupation forces forcefully evicted two Palestinian families from the Sheikh Jarrahm in the East Jerusalem neigbourhood and demolished their homes. The demolition and expulsion follows days of protests by the affected Salhiyeh family household. According to reports Israeli forces broke into their home in the night and assaulted family members. Six of the family members were arrested, including the head of the household, Mahmoud Salhiyeh. Earlier, the Israeli forces arrested 25 people for protesting against the eviction drive on January 17.

Israel had been long attempting to confiscate Palestinain lands in the Sheikh Jarrah neighbourhood, part of the East Jerusalem area which was occupied and annexed during the 1967 war. The neighbourhood is home to around 2,800 Palestinian residents. More than 60 Palestinians, including 24 children, have been forcibly evicted from their homes in this area by Israeli authorities since late 2008. Israel claims the land will be allotted to build a special needs school, but Israel’s real intent stands exposed as according to the Jerusalem municipality’s own master plan the school is not on the Salhiyeh family’s land but adjacent to it.

During the similar eviction drive to remove around 100 families last year in May, Israel faced massive resistance across West Bank and Gaza leading to brutal Israeli military aggression against Palestinians. More than 260 Palestinians, including 66 were children during the 11-day long aggression.

This is second eviction of Salhiyeh family from their land. Earlier it was forcibly displaced from the Ein Karem village in West Jerusalem in 1948 during the Nakba. Nakba (also known as the Palestinian Catastrophe)  refers was the massacre and forces expulsion of Palestinains from their land in 1948 by Israel. More than 700,000 Palestinians were made refugees and more than 13,000 had been killed by the Israeli military during the Nakba.

Israel had been continuously expanding its annexation of Palestinain lands by expanding illegal Jewish settlements on Palestinian land. There are between 600,000 – 750,000 Israeli settlers living in at least 250 settlements (130 official , 120 unofficial) in the occupied West Bank and East Jerusalem. Furthermore, Israel maintains an extensive aparthied style infrastructure including settlement-only-highways to military checkpoints all over the West Bank.

Israel is also attempting to completely annex the Jordan Valley, which makes around 22 percent of the West Bank. This move would mean that Palestinians would be physically cut off from the Jordan River.

The on-going rapid annexation move by Israel was spearheaded by former Prime Minister Benjamin Netanyahu backed by the then United States President Donald Trump under the disguise of a peace plan.

The 141 days long hunger strike by Palestinian political prisoner Hisham Abu Hawash ended in victory after Israel agreed to release him. Abu Hawash went on hunger strike in protest at the occupation state's decision to hold him since October 27, 2020 without any trial. Such a protest is indicative of the determination and defiance of thousands of Palestinian political prisoners who are illegally incarcerated in jails. According to reports there are around 4,600 Palestinian prisoners held in Israeli jails, many of them being held with neither charge nor trial. Around 600 are cancer patients and more than 157 are Palestinian minors.

Inside Israeli prisons, Palestinian prisoners are forced to live in appalling conditions and are subjected to harsh treatment, including being subjected to various forms of physical and psychological abuse: arbitrary beatings, excessive use of solitary confinement and the denial of family visits. According to Saleh Abu Laban, former Palestinian Prisioner, “the Israelis do this [imprison you] in order to turn you from a human being into a creature barely alive. Someone forgotten. Living only to eat and sleep.”