Skip to main content
The chronology is clear: the arrests of human rights defenders follow language by the Supreme Court of India framing “protagonists of the quest for justice” as conspirators for seeking to hold the Gujarat State machinery accountable for targeted violence.
Repression & Resistance 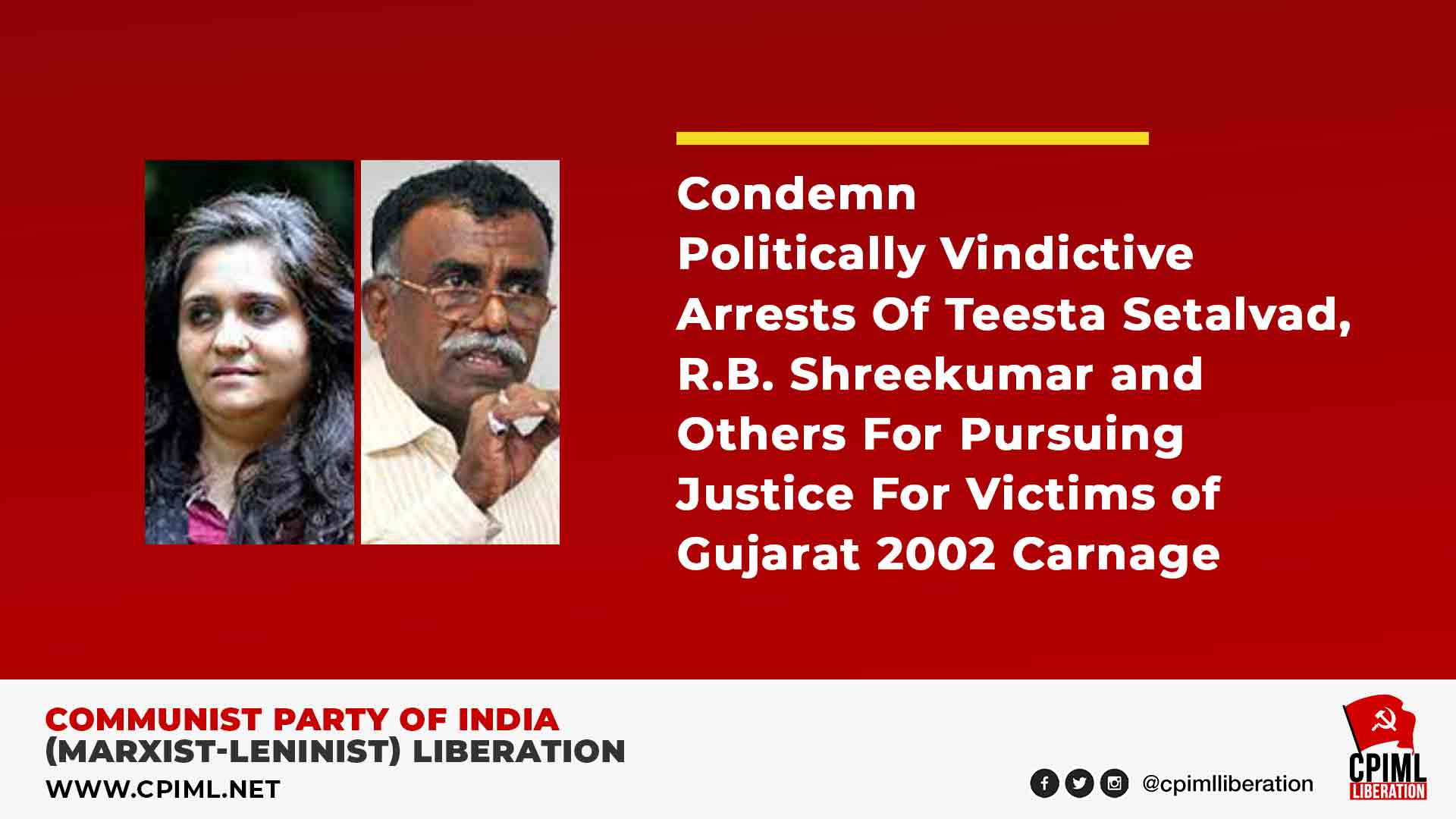 During the targeted violence against Muslims in Gujarat 2002 the former MP Ehsan Jafri called the then CM Narendra Modi as well as other persons in authority for help when his home was surrounded by a murderous Hindu-supremacist mob. No help arrived - and Ehsan Jafri was tortured and burnt alive. His wife Zakia Jafri has since then courageously pursued the quest for truth and justice in the courts for the past two decades, seeking to establish the complicity of the 2002 Gujarat Government headed by the CM Modi in the targeted violence. She was supported in this quest for justice by the indefatigable human rights defender Teesta Setalvad and her organisation Citizens For Justice and Peace. A number of public servants who served in Gujarat in 2002 including an intelligence officer R.B. Shreekumar refused to perjure themselves to defend the Gujarat Government of the day headed by the then CM Narendra Modi, and have consistently spoken their truth to serve the cause of justice.

Just yesterday the Supreme Court dismissed Zakia Jafri’s petition appealing the lower court’s decision to accept the SIT report giving to clean chit to Narendra Modi for his role in Gujarat’s anti-Muslim violence of 2002. Less than 24 hours after this dismissal the Gujarat Anti-Terrorism Squad has swooped down to file FIRs against Teesta Setalvad, R.B. Shreekumar and others, arresting them and taking them to Ahmedabad. Certain observations in the Supreme Court’s judgment itself have, shamefully, paved the way for this vindictive prosecution. The judgment did not stop at dismissing the petition for lack of grounds. It named and blamed Teesta Setalvad for allegedly exploiting Zakia Jafri’s pain, asking that she as well as those public servants of Gujarat contradicted the Gujarat police’s narrative be put “in the dock” for their efforts.

To quote the Supreme Court of India,
“The protagonists of the quest for justice sitting in a comfortable environment in their air-conditioned office may succeed in connecting failures of the state administration at different levels during such a horrendous situation, little knowing or even referring to the ground realities and the continual effort put in by the duty holders in controlling the spontaneous evolving situation unfolding aftermath mass violence across the state.”

The chronology is clear: the arrests of human rights defenders follow language by the Supreme Court of India framing “protagonists of the quest for justice” as conspirators for seeking to hold the Gujarat State machinery accountable for targeted violence. To make the chronology even clearer, the FIR filed by the Gujarat ATS quotes excerpts from the judgment in order to justify its actions against Teesta Setalvad and others. This detention also comes a day after Amit Shah made a statement against Teesta.

It is a sad day for India, when the highest court of the land instigates the State to prosecute those who supported victims of targeted violence by Hindu-supremacist mobs, in their effort to make the connection between that violence and the Hindu-supremacist politics and actions of Narendra Modi who served as CM during the violence. We salute the courage of Zakia Jafri, Teesta Setalvad, R.B. Shreekumar and others who did not falter in their pursuit of justice even when Narendra Modi became Prime Minister. It does not augur well for a democracy when the Supreme Court inexplicably criminalises this pursuit of justice and calls for every person involved need to be in the dock and proceeded with in accordance with law. Their arrest is a product of the vindictiveness of PM Modi and Home Minister Shah, enabled by the apex court of India.