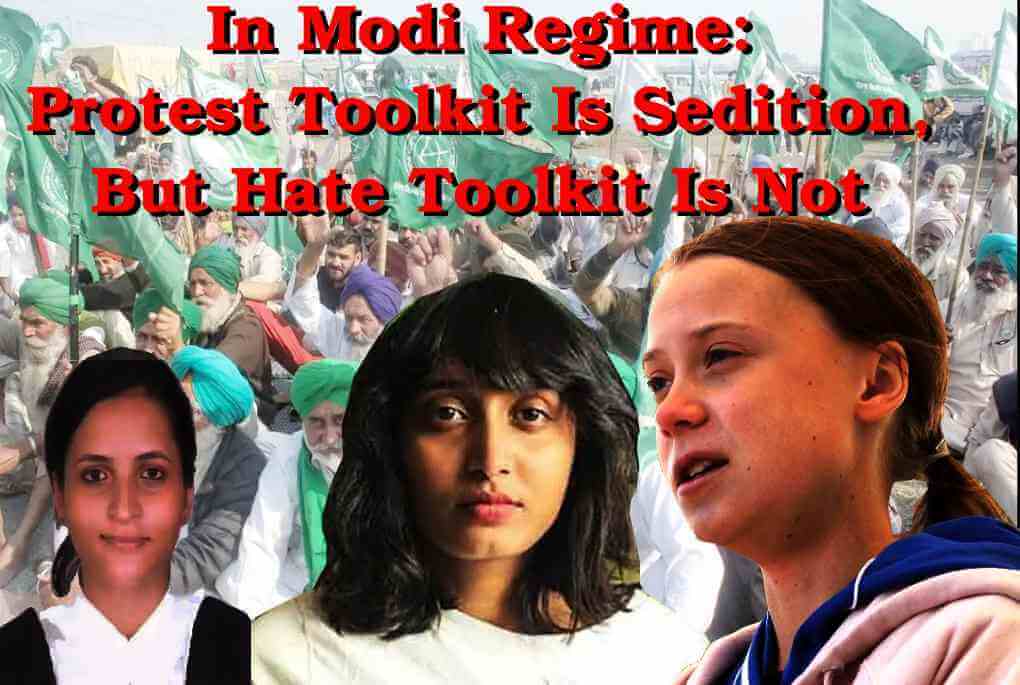 The Delhi Police’s “Toolkit FIR” is part of the Modi regime’s toolkit to suppress and punish dissent, and strangle democracy in India. The “toolkit” is an advocacy document explaining the key issues of the farmers’ movement to laypersons, and encouraging them to support it by using hashtags, making videos, and organising protests. These actions are the bare bones of democratic protest. By criminalising such actions, the Modi regime is revealing its authoritarian character.

The Delhi Police, directly answerable to India’s Home Minister, behaved in a brazenly illegal manner in barging into the Bengaluru home of environmental activist Disha Ravi, and spiriting her away out of Karnataka to Delhi, violating a host of legal and constitutional safeguards. If Modi’s Home Ministry can weaponise a frivolous FIR registered in Delhi as a pretext to arrest any citizen anywhere in India, it is a shameful blow to federalism and democracy. It is all the more shameful that the BJP Government of Karnataka has chosen to align with the Delhi Police and the Central Government at the cost of the rights and liberties of Karnataka’s people.

We demand that the cases against Disha Ravi, Nikita Jacob and other climate change activists and farmers’ movement leaders be dropped immediately, and all those arrested in this regard, be released without delay.

The young environmental activists are seen as “enemies” by the Modi regime because they have consistently and successfully challenged the regime’s policies of diluting environmental regulations to help its crony companies belonging to Adani and Ambani.

Non-violent protest and civil disobedience must not be criminalised. Systematic campaigns advocating hatred and violence should face criminal charges. We demand that the Delhi Police answer why BJP leaders like Kapil Mishra and ABVP leaders like Komal Sharma, who actually incited and led mobs that committed violence, are yet to face charges or be arrested? Why is the Delhi Police taking no action against the hate factory led by Kapil Mishra on social media networks? The Delhi Police is accountable to the Constitution of India, and owes answers to “we, the people of India.”